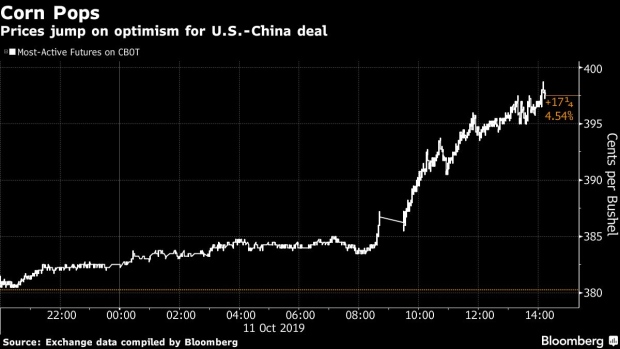 (Bloomberg) -- Soybean futures jumped to the highest in more than three months, while corn extended gains, on news that the U.S. and China reached a partial agreement in the trade war that could lay the groundwork for a broader deal.

China would agree to some agriculture concessions as part of the deal while the U.S. would offer tariff relief, Bloomberg reported Friday. China already had offered to boost purchases of U.S. agriculture products such as soybeans and corn. Hog, cotton and ethanol futures also gained in Chicago.

“There’s a lot of expectations we get a deal,” Jack Scoville, vice president at Chicago brokerage Price Futures Group Inc., said by telephone.

President Donald Trump was due to meet Chinese Vice Premier Liu He in Washington, just after grains markets close in Chicago. The meeting and potential risks surrounding wintry weather in the northern U.S. and in southern Canada that could curb supplies of some crops prompted some grain traders to close out bets.

“It feels like a huge risk-off event ahead of the weekend,” said Joe Nussmeier, a broker at Frontier Futures in Minneapolis.

Some traders remained skeptical buying soybeans from the U.S. represented a significant breakthrough in the overall trade talks, according to people familiar with the matter. China has been buying soybeans in Brazil in the past two days after some goodwill purchases from the U.S. and the strategy of switching between the two countries has helped China secure lower prices, the people said.

"I am a bit pessimistic this could be the real deal as we have stumbled on the finish line a few times," said Niko Anderson, a grain broker at SCB Group in Chicago."While recent export sales out of the Pacific Northwest seem very encouraging, we have seen China buy before without any deal actually being reached.”