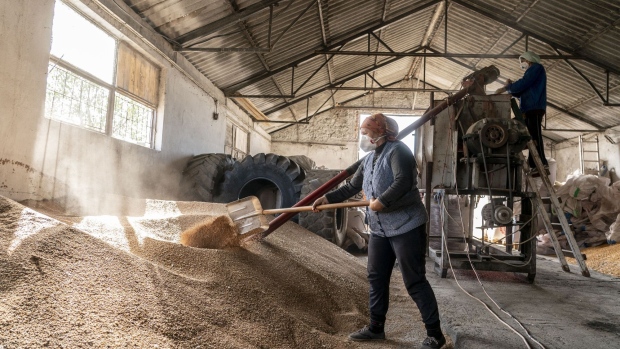 A agricultural worker shovels grain in a storage barn on a farm near the Danube Black Sea Canal in Agigea, Romania, on Tuesday, Oct. 8 2019. The region that straddles the Danube in Romania and Bulgaria has made it a bread basket for centuries but after fits and starts toward the free market, chronic shortages, corruption and political upheaval, it’s plugged into the world economy thanks to the EU’s open borders and money. , Bloomberg

(Bloomberg) -- More crop traders are gaining a presence in Romania, one of Europe’s major grains hubs.

The Andersons, Inc. plans to open a local office to deal in grains and oilseeds, with aims to start operating in time for next season, according to people familiar with the matter. It has begun making local hires, they said.

The move would extend the recent international push by Andersons, one of the largest US crop merchants. The company set up a Swiss trading desk last year and has hired several former Ameropa traders.

The company set up a legal entity in Romania this year, a spokesperson confirmed to Bloomberg, declining to comment further. An Andersons spokesperson did not respond to requests for comment.

Romania is one of the European Union’s largest crop shippers, with large volumes of corn, wheat and oilseeds. Its ports have handled an added influx of grain this year as Ukraine is forced to ship some of its agricultural products via neighboring nations amid Russia’s invasion.

--With assistance from Kim Chipman and Isis Almeida.