A crop rally in the U.S. is making essential food commodities dramatically more expensive, and the costs could soon spill over onto grocery store shelves.

Wheat, corn and soybeans, the backbone of much of the world’s diet, are all surging to highs not seen since 2013 after gains last week had some analysts warning that a speculative bubble was forming.

Bad crop weather in key-producing countries is a major culprit. Dryness in the U.S., Canada and France is hurting wheat plants, as well as corn in Brazil. Rain in Argentina is derailing the soy harvest. Adding to that, there are fears of drought coming to the American Farm Belt this summer.

Meanwhile, China is gobbling up the world’s grain supplies and is set to import the most corn ever as it expands its massive hog herd. Rumors are swirling that the Asian nation is working on 1 million metric tons of new corn purchases, according to Arlan Suderman, chief commodities economist at StoneX.

“We are getting close to the point of having to ration demand,” Jacqueline Holland, an analyst at Farm Futures, said in a phone interview. “Farmers are either running out of crops to sell or waiting for the market to go even higher.”

The rally is stirring food inflation fears, because staple crops heavily influence consumer prices for everything from bread and pizza dough to meat and even soda. The Bloomberg Agriculture Spot Index — which tracks key farm products — soared the most in almost nine years last week.

Pricey crops are also helping to drive even broader gains across the commodities complex, with metals such as palladium and copper rallying on a comeback in industrial operations around the world. 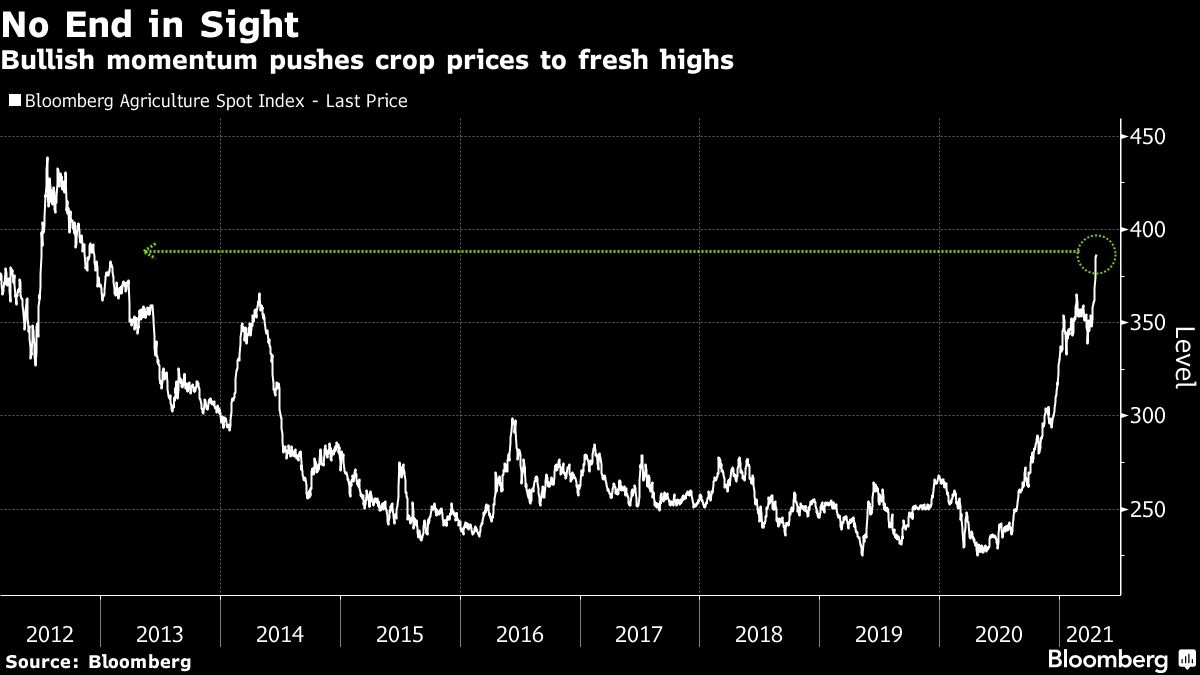 Wheat climbed to the priciest since February 2013 before closing 3.8 per cent higher at US$7.395 a bushel. Fresh buyers are starting to step in, with both Egypt and Bangladesh issuing new tenders.

Soybean oil traded at levels not seen in a decade. An expected increase in Canada’s canola acreage won’t be enough to alleviate tight inventories, according to Farmers Business Network. The U.S. will update planting progress and crop condition figures later Monday in Washington.

Bullish investor momentum has yet to fade. Net long soybean bets surged the most since September in the week through April 20, and money managers flipped to a positive stance on wheat.

Still, soybean, wheat and corn futures in Chicago are all trading in overbought territory with their 14-day relative strength indexes above 70, indicating that prices may have risen too far, too fast. Values declined in China, signaling a possible calming of shortage fears as summer crop plantings progress and hefty purchases of foreign supplies continue to arrive at ports.

--With assistance from James Poole.