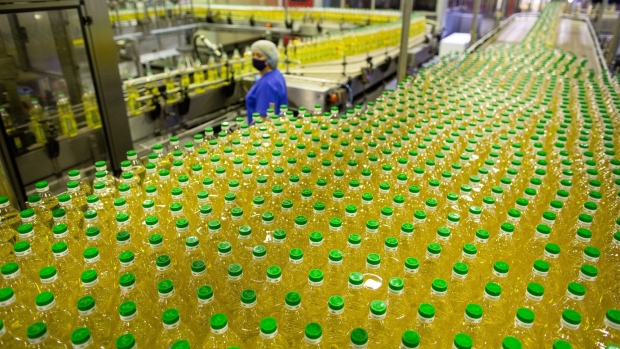 Bottles of sunflower oil move along the production line at the EFKO JSC plant in Alekseyevka, Russia, on Friday, April 30, 2021. Russia published details in March of a formula-based export duty for sunflower oil, which will be implemented from Sept. 1. , Bloomberg

(Bloomberg) -- Bunge Ltd. restructured its Russian business by changing the name and moving the country of origin to Bermuda, paving the way for a potential sale of its biggest sunflower oil plant in Russia.

The world’s biggest oilseed processor remade subsidiary Bunge CIS LLC into Integrated Vegetable Oils and Proteins Holdings Ltd., and relocated the main office -- on paper -- to the British territory, according to public documents obtained by Bloomberg. The changes occurred this week.

This marks the first step taken by any global crop traders to restructure operations in Russia after its invasion of Ukraine in February. Hundreds of companies have either left the country or closed their offices and operations as nations impose sanctions on Vladimir Putin’s government.

Russian news service Interfax reported June 28 that Bunge was looking for a buyer for the Russian operations. The outlet cited sources it didn’t identify.

“The company has done an internal restructuring but remains under Bunge ownership,” the company said in an email response to questions. It declined to comment on why the changes were made now and whether any sale discussions are underway.

The facility was built in the Voronezh region by Bunge SA and can produce 540,000 tons of raw materials, mainly sunflower oil, per year, according to the company’s website. The plant cost about $130 million to build in 2005-2008, and a capital increase of about $25 million was made this week, according to the Unified State Register of Legal Entities.

Logistical issues may influence the company’s decision to sell. The war blocked purchases from Ukrainian farmers, limiting the ability to source cheaper grains closer. Russian shelling may have damaged necessary infrastructure in Ukraine, and the facility is at least 650 kilometers (404 miles) from the southern ports of Azov.

There likely will be several opportunities to own critical Russian and Ukraine assets as western traders exit the region, said Manish Marwaha, commodities and industrials partner at consultancy Roland Berger.

“This will be an opportunity for others to snap up these strategic assets at attractive prices,” Marwaha said.