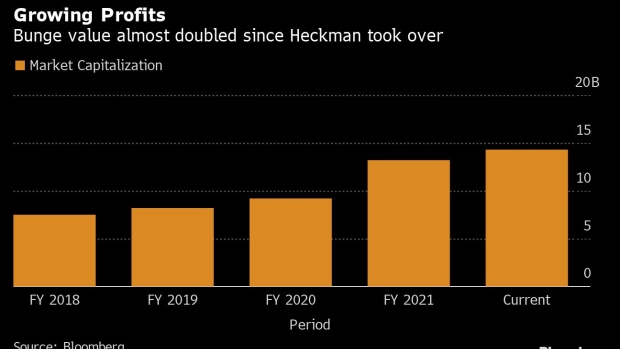 A buggy collects corn as it is harvested on a farm in Chesterville, Ontario, Canada, on Thursday, Nov. 24, 2022. Canadian crop production forecasts are firm, with production expected to come in up +36% y/y, MT Newswires reports. Photographer: Christinne Muschi/Bloomberg , Bloomberg

(Bloomberg) -- Four years after winning a battle against Bunge Ltd., Continental Grain Co.’s Paul Fribourg is finally giving up his seat at one of the world’s top agricultural commodities traders.

Fribourg, who joined Bunge’s board in 2018, is resigning from his post at the end of the year, the St. Louis-based company said in a regulatory filing. The move comes after Bunge turned its business around under the leadership of Chief Executive Officer Greg Heckman, almost doubling its market value in the period.

Continental Grain — known for leading the sale of millions of tons of US grain to the Soviet Union in the 1970s in an episode that became known as the Great Grain Robbery — carried out a six month activist campaign against Bunge in 2018. Together with D.E. Shaw & Co., the company run by Fribourg won board seats and pushed for change.

Bunge replaced its top boss at the end of 2018, bringing in Heckman to steer the ship. After hiring two former colleagues and centralizing the company’s operations in a similar way the team did when they worked for Conagra Brands Inc., Bunge sold underperforming businesses, struck joint ventures and improved the operations and utilization rates of its many assets across the globe.

Fribourg is leaving for personal reasons, according to the filing but Continental Grain has recently sold some of its stake. It now owns just over one million shares, or 0.7% of the business. His departure will reduce Bunge’s board size to 11 members.

Shares in Bunge surge almost 75% in the past four years. During that period, the company benefited by a jump in demand for soybeans after the US and China signed a trade deal and the emergence of the renewable diesel market. It also cut costs and reduced unplanned downtime at its plants by 25%, while increasing utilization rates of its soy and softseed crush plants by 60% and 40% respectively.