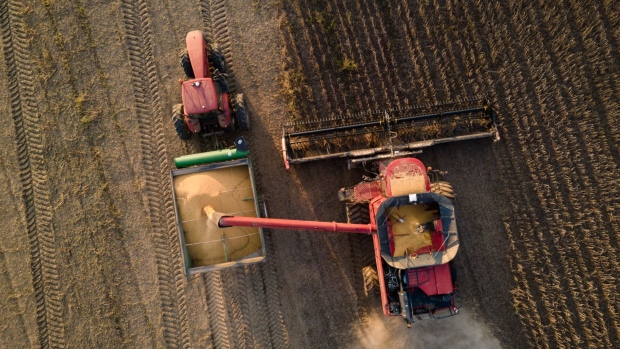 A combine harvester unloads soybeans into a grain cart during a harvest in Pace, Mississippi, U.S., on Thursday, Oct. 7, 2021. The U.S. Department of Agriculture (USDA) is scheduled to release 2021-22 soybean stockpiles estimates on October 12. , Bloomberg

US soy production is forecast at 4.531 billion bushels, a record. USDA also raised its soy yield estimate to 51.9 bushels an acre, the highest ever and more than analysts expected. That’s mainly because crops advanced more quickly than normal in states such as top grower Illinois, the report said.

This month’s World Agricultural Supply and Demand Estimates, or WASDE, is closely watched as it comes in the midst of the US growing season. The data also arrived as Russia’s invasion of Ukraine stoked inflation worldwide. Any falling prices for crops could add to optimism that inflation could ease. World food prices already declined by the most since 2008 this past July.

The projections for corn supplies, however, are more complicated, and conflicting data in the report caused that market to swing wildly after initially following soybeans lower.

There’s optimism that the newly agreed Ukraine grain-export deal will prove successful, and the USDA raised its estimate for the country’s corn exports as well as production by a significant amount. However, it also slashed its EU crop outlook and US yields.