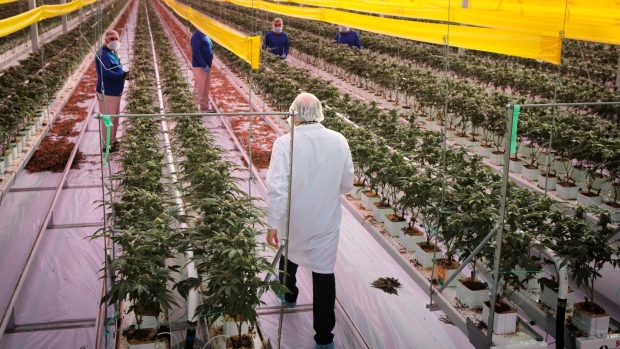 (Bloomberg) -- The line that divides Canada from the U.S. is looking more and more illusory for the cannabis industry.

The 49th parallel used to be a big deal for marijuana growers. Canada’s legalization in 2018 spurred a generation of startups north of the border and investors flooded in with the hope they would follow the path of Canadian alcohol companies, which got a head start on U.S. competitors before prohibition was repealed.

Now, as more U.S. states have legalized cannabis, American firms have overshadowed their Canadian peers. And some Canadian companies, unable to export into the U.S. with its larger population, stagnated. But a series of creative deals may upend those dynamics.

Tilray Inc.’s purchase of MedMen Enterprises Inc.’s debt last week is the latest example. It’s similar to the first such creative cross-border deal, Canopy Growth Corp.’s option to buy U.S. company Acreage Holdings. Both could let Canadian companies buy a U.S. target if legalization occurs. It’s the third deal that gives Tilray a leg up on U.S. legalization: Its Aphria merger gave it SweetWater Brewing Company in Atlanta, which it can leverage to make THC drinks or distribute cannabis in the Southeast, while Manitoba Harvest could convert to selling THC edibles.

Canadian retailer Fire & Flower also made a creative cross-border deal earlier this month by opening a dispensary in Palm Springs, California. While Canadian companies can’t export marijuana to the U.S., the store was created through a licensing partner, American Acres, which officially changed its name to Fire & Flower U.S. Holdings. The licensing agreement will also let it open stores in markets like Arizona, Nevada and other areas in California over the coming months, Fire & Flower said.

Then there’s Scotts Miracle-Gro, which has gotten a boost from selling cultivation equipment into the cannabis market. The company is barred from getting into “plant-touching” businesses because it’s traded on the New York Stock Exchange. But the maker of fertilizer and gardening supplies this month invested $150 million in Toronto-based cannabis investment firm, RIV Capital. Chief Executive Officer Jim Hagedorn said the deal will let Scotts “participate directly in a larger marketplace as the legal environment changes over time.” The structure was made “with full appreciation of current banking and legal requirements,” Hagedorn said in the statement.

Meanwhile, Flora Growth, a Colombia-based marijuana grower, got a foothold in the U.S. market through the purchase of a vape pen maker, showing that it’s not just Canadian companies that are jockeying for position ahead of an expected federal U.S. legalization.

“When I originally got the call I wasn’t interested. Then I met the team, visited Los Angeles, saw the iconic brands, saw the number of people standing in line, and I went to my Millennial-aged kids. I asked them about these MedMen products -- and there were rave reviews,” said Tilray CEO Irwin Simon in a phone interview about the company’s decision to buy a majority position in MedMen convertible notes.