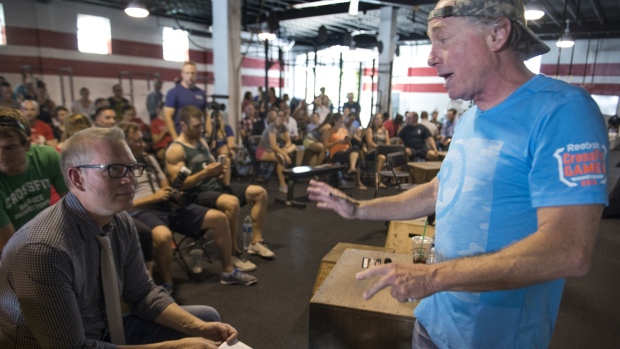 Greg Glassman, right, talks to employees prior to a presentation in 2015. , Linda Davidson / The Washington Post via Getty Images

CrossFit Inc. chief executive officer Greg Glassman is out at the fitness company he co-founded, the latest senior leader to step down as the U.S. reckons anew with its history of racial injustice and police brutality.

“I created a rift in the CrossFit community and unintentionally hurt many of its members,” Glassman said in a statement late Tuesday, days after he tweeted about the Black Lives Matter protests and the death of George Floyd at the hands of Minneapolis police.

Affiliate gym owners, employees and customers criticized the posts as insensitive and tone-deaf. Adidas AG’s Reebok also said it would end its longtime sponsorship of the CrossFit Games after the event in 2020, according to Footwear News.

Documented by cell phone video, Floyd’s death has sparked more than a week of demonstrations in more than 150 cities around the U.S., with protesters demanding deep reform to police practices that unfairly target black people. Protests have spread around the globe, with demonstrators from Australia and New Zealand to the United Kingdom and France are using the moment as a launching point to review their own countries’ histories of racial prejudice.

The movement has also reverberated in corporate America, where many companies have signaled solidarity with the protesters. At the same time, several high-profile and senior executives have been fired, stepped down or placed on leave in recent weeks, the result of growing intolerance for expressions of racism or evidence of bias. The ousters have so far been especially visible in media, with changes at the top of Bon Appetit, Refinery29, the Philadelphia Inquirer, Variety and the New York Times Opinion section.

The entertainment industry, still reeling from the widespread sexual harassment scandals that brought some of Hollywood’s most powerful players, is now auditing its content -- and the people who make it.

Television networks and streaming services are now reconsidering some popular classics. Netflix and the BBC pulled reruns of sketch comedy show “Little Britain” over its repeated use of blackface. HBO Max removed “Gone With the Wind,” Variety reported, though the Oscar-winning Civil War epic may later return with a note attached to explain controversies over the 1939 film’s rosy portrayal of slavery. Paramount Network canceled the long-running police reality show “Cops.”

Meanwhile, four cast members from Bravo’s reality show, “The Vanderpump Rules,” have been fired, CNN reported. The CEO and co-owner of The Second City Chicago acknowledged an institutional legacy of racism at the influential comedy outpost and resigned. Hartley Sawyer, who played the Elongated Man on CW’s superhero show “The Flash,” was fired for tweets the actor later acknowledged were “hurtful and unacceptable,” according to the BBC.

CrossFit is a brand of fitness regimen that incorporates weightlifting and aerobic exercise and has spawned at least 15,000 affiliate gyms worldwide. Its vast appeal and popularity was so widespread that the company created the CrossFit Games in 2007, an annual televised competition where athletes compete for more than $2.3 million in prize money.

Glassman’s fall started with a June 6 reply to an Institute for Health Metrics and Evaluation tweet calling racism a critical public health issue. Glassman, whose Twitter handle is @CrossFitCEO, commented on Saturday, “It’s FLOYD-19,” then went on from there.

Your failed model quarantined us and now you're going to model a solution to racism? George Floyd's brutal murder sparked riots nationally. Quarantine alone is "accompanied in every age and under all political regimes by an undercurrent of suspicion, distrust, and riots." Thanks!

At a time when many across the U.S. are deeply angry about the death of Floyd and other black people at the hands of police, the posts struck CrossFit affiliates and customers as dismissive and deaf to the pain of the black community. The account @CrossFitFresno replied, “As a 10+ year @CrossFit affiliate that is coming out of 3 months of business closure, we are already struggling. How could you do this to your brand that we pay to be affiliated with? Please help us understand.”

In an open letter following Glassman’s departure, CrossFit headquarters called his statements “incredibly insensitive and hurtful.” The letter, titled ‘Why Didn’t CrossFit Just Say Something,’ also addressed the company’s silence on the protests in general and, for several days, Glassman’s tweets.

“We weren’t sure how to get the message right, and as a result, we failed catastrophically by not effectively communicating care for the Black community,” the letter said.

“That does not excuse the fact that Greg’s statements were incredibly insensitive and hurtful,” the letter continued. “Please accept our deepest apology for contributing to the pain and confusion permeating our community — a community we love and respect for its vibrancy, strength of spirit, and diversity.