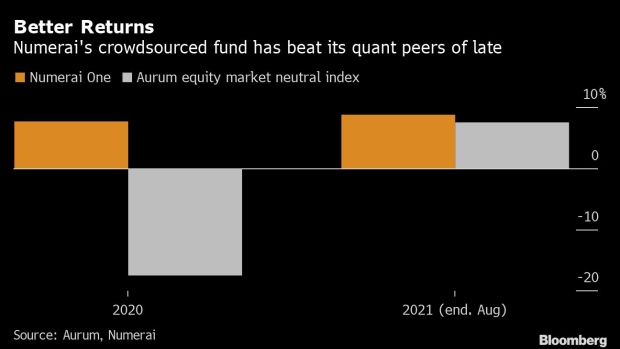 And he should know. Burgoyne is a NASA engineer who spends his days plotting a mission to explore the moons of Jupiter. But at night, the 32-year-old is an amateur quant and part of an online community earning cryptocurrency for their stock-picking prowess.

It’s quant investing for the era of democratized trading.

“I have no finance background so it puts people like me on an equal footing with somebody with an economics PhD,” Burgoyne said from Los Angeles County, where he helps develop the spacecraft for an interplanetary project known as the Europa Clipper.

Without revealing their models, the contributors pick stocks they think will outperform in the coming month and make bets in online trading tournaments using a digital currency issued by Numerai. The San Francisco-based firm, established in 2015, then invests in the corresponding stocks.

Those picks from the likes of Burgoyne, a world away from Wall Street, have powered the market-neutral fund to a 9% gain this year through August. In 2020 it was up 8% when many storied quants faltered.

“By setting up the problem and being in charge of data people look at, we can get exactly the type of signal we want,” said Numerai founder Richard Craib. “Although they might not work individually, when you combine them altogether the increase in accuracy and performance is huge.”

With $45 million in assets currently, one pension fund could be set to allocate as much as another $130 million if the firm hits certain milestones, according to Craib. He declined to disclose further details because the information is private.

The wisdom of crowds. Digital assets. Quant models. It all risks sounding like the latest gimmick in an industry dealing with the exorbitant costs of in-house talent.

Meanwhile, there are well-known problems with trading market patterns purely based on statistical models, and it’s too early to tell if Numerai will sidestep them. There have been other crowdsourcing platforms -- most notably Quantopian -- who started with big ambitions but shuttered after failing to harvest consistently winning stock ideas from the masses.

But so far something is working for Numerai, perhaps thanks to a unique business model that is also riding the cryptocurrency boom.

Users like Burgoyne parse a whole assortment of data on 5,000 stocks from price history to valuation ratios, without knowing what the underlying metric actually is. Participants then score each security on how likely it is to outperform in the coming month, and bet on their own predictions with Numeraire, the digital token issued by the firm.

Those who do well get more “NMR” tokens, while underperformers can see some of their holdings wiped out. Numerai puts its portfolio together based on how much users stake on their models using the the digital currency.

While early adopters received free tokens initially, most users buy them in the secondary market at venues like Coinbase. Craib says the firm has given out about 2 million tokens as rewards so far, worth an estimated $88 million after NMR surged 47% since the end of 2017.

“Even if we gave away 100% of our profits of the fund to our users we will never be able to pay as much,” said Craib, who used to work as a quant at Prudential Plc in Cape Town. “What I like about cryptocurrencies is the idea that actually through the community, the cryptocurrency is valuable for its own reasons.”

The mania for all things digital currency has buoyed the whole business model this year. Yet the risk of a reversal in crypto sentiment is doing little to dent enthusiasm among Numerai participants.

Sharon Moran, a 43-year-old hoping to embark on a new data-science career, says Numerai is a good platform to test the skills she learned from online coding classes. Her initial roughly 4 NMR stake has returned 10% over the past three months, enough to make Moran wonder if she can reap more profits by putting new money in.

“As a mother of three with a daughter in private college, there’s the money consideration,” she said from Camden County, New Jersey. “But the ability to learn and grow and apply some of what I’ve been learning as far as modeling was the initial motivation.”

As for Burgoyne, he now has some 630 tokens staked in his predictions. The profits over the years have helped bankroll his wedding and honeymoon across South America, but aren’t enough to lure him away from NASA just yet.

“This is just a hobby that’s more lucrative than most,” he said.