The CRTC decision to reverse wholesale rates was not surprising: BCE CEO

Canada’s latest spectrum auction, which begins Tuesday, may create a path for Quebecor Inc., Cogeco Communications Inc. and other regional telecom players to compete more directly with the Big Three companies that dominate the wireless market.

Elected officials and regulators have been pushing for increased competition for years to help drive down wireless prices for consumers. But in March the industry moved toward further consolidation when the No. 1 wireless carrier by subscribers, Rogers Communications Inc., made a US$16 billion deal to acquire Shaw Communications Inc., parent company of Freedom Mobile, the fourth-largest provider.

That deal is being reviewed by antitrust regulators, who aren’t expected to give their ruling until next year. Shaw, in the meantime, opted out of the auction in April.

The absence of Shaw, which is more than twice as large as Quebecor and three times as big as Cogeco by market capitalization, may create an opening for those carriers to be more aggressive in the auction for 3,500-MHz spectrum, a critical component of the nation’s 5G rollout, and expand beyond their usual markets. In territories where enough spectrum is available, 50 MHz is “set aside” for smaller players to buy.

The race to offer 5G services is heating up around the world. U.S. carriers have spent billions on licenses for networks that promise speeds 10 times faster than current connections, with T-Mobile US Inc. establishing an early lead after acquiring Sprint Corp. and its midband airwaves. Canada’s 3,500 MHz auction is also selling midband spectrum, and the licenses have a 20-year term.

Spectrum is never cheap, but the bigger regional companies can afford it, according to Canaccord Genuity analyst Aravinda Galappatthige. Quebecor, which owns cable and wireless provider Videotron Ltd., is likely to bid for all the set-aside spectrum in the province of Quebec and in the city of Ottawa, the analyst said in an April note to investors.

“If we want sustainable competition that benefits consumers over the long term,” Peledeau said, it’s “essential” to continue the Canadian government’s longstanding policy of encouraging other players to compete with Rogers, BCE Inc. and Telus Corp., which together control the industry with well over 80 per cent wireless market share. 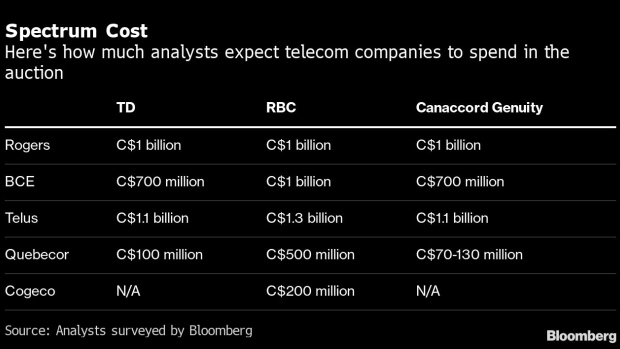 Peladeau has asked the government and regulators to force Rogers to divest Freedom Mobile unit as a condition of approving the Shaw deal, hinting that Quebecor could be a potential buyer if that happens. Some analysts expect regulators will demand such a sale.

Shaw’s absence also opens the door in regions where Cogeco operates. “Shaw was very likely to be the only bidder in set-aside blocks in most of Ontario, British Columbia and Alberta,” Scotiabank analyst Jeff Fan wrote in a March report. “We think CCA has a clear path for the set-aside licenses that overlap its Ontario cable footprint,” which includes parts of suburban Toronto.

Cogeco doesn’t currently sell wireless services. Shaw, through Freedom Mobile, has about 2 million wireless subscribers, compared with more than 10 million each for Rogers, BCE and Telus.

The auction itself will be a quiet affair. Bidders aren’t allowed to speak openly about the process, nor can they talk to competitors about their plans, according to rules set by the government

The auction will go on for as long as it takes to cull excess bidders down to one for each spectrum category. The outcome probably won’t be known for weeks. In 2019, there were 54 bidding rounds; in 2008, there were 331.