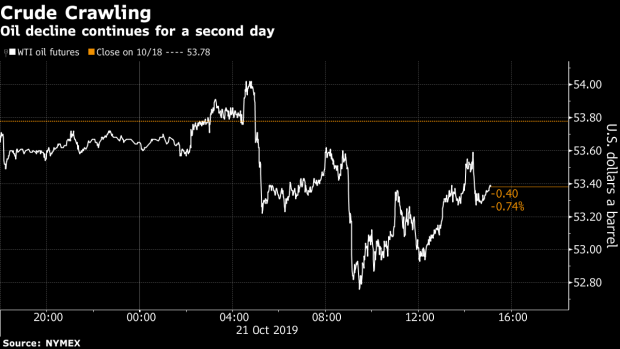 A worker passes stores of oil drums and gas flares while working aboard an offshore oil platform in the Persian Gulf's Salman Oil Field, operated by the National Iranian Offshore Oil Co., near Lavan island, Iran, on Friday, Jan. 6. 2017. Nov. 5 is the day when sweeping U.S. sanctions on Iran’s energy and banking sectors go back into effect after Trump’s decision in May to walk away from the six-nation deal with Iran that suspended them. Photographer: Ali Mohammadi/Bloomberg , Bloomberg

(Bloomberg) -- Oil was little changed in Asian trading on Tuesday after falling for two days amid ongoing concern that a fragile economic outlook will weigh on fuel demand.

Futures in New York rose 0.1%, after falling 0.9% on Monday for a second straight losing session. Policymakers in China are preparing for two key meetings with fresh evidence that economic growth already at its lowest in almost three decades will continue to slip. Speculators have almost tripled short positions in U.S. crude futures since mid-September as Washington and Beijing struggled to strike a trade deal, according to data on Friday.

To contact the editors responsible for this story: Ramsey Al-Rikabi at ralrikabi@bloomberg.net, Keith Gosman