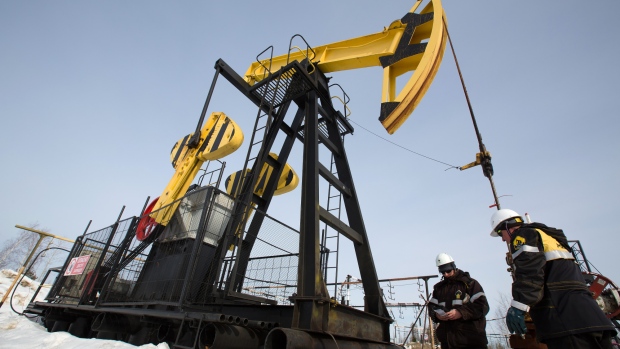 A worker operates drilling machinery at the turntable area of an oil drilling rig, operated by Rosneft PJSC, in the Samotlor oilfield near Nizhnevartovsk, Russia, on Tuesday, March 21, 2017. Russia's largest oil field, so far past its prime that it now pumps almost 20 times more water than crude, could be on the verge of gushing profits again for Rosneft PJSC. , Bloomberg

Crude declined after the U.S. government was said to have asked Saudi Arabia and other OPEC producers to raise oil supply.

The request for a 1 million-barrel-a-day increase follows Washington’s decision to reimpose sanctions on Iranian crude exports that had removed roughly the same amount from global markets when restrictions were previously in place earlier this decade. OPEC pumped 31.9 million barrels a day last month, unchanged from April when production was the lowest in a year, according to a Bloomberg survey.

Crude has lost its grip after last month rising to the highest level in more than three years. The decline follows a proposal by Saudi Arabia and Russia to ease output cuts to replace potential supply losses in Iran and Venezuela. With the Organization of Petroleum Exporting Countries’ next summit a little over two weeks away, the market is looking for any clues on the scale of possible output increases.

“OPEC has every potential reason to raise production, they’ve achieved their mission,” said Nitesh Shah, a commodity analyst at Wisdomtree Europe Ltd. “That’s going to be the focus for the next few weeks now.”

Brent futures for August settlement fell as much as US$1.48 to US$73.81 a barrel on the London-based ICE Futures Europe exchange, and were at US$74.33 as of 1:53 p.m. local time. The global benchmark crude earlier fell beneath its 50-day moving average for the first time since April 4. Brent traded at a US$9.86 premium to West Texas Intermediate for the same month.

WTI for July delivery dropped 24 cents to US$64.51 a barrel on the New York Mercantile Exchange. Total volume traded was about 12 per cent above the 100-day average.