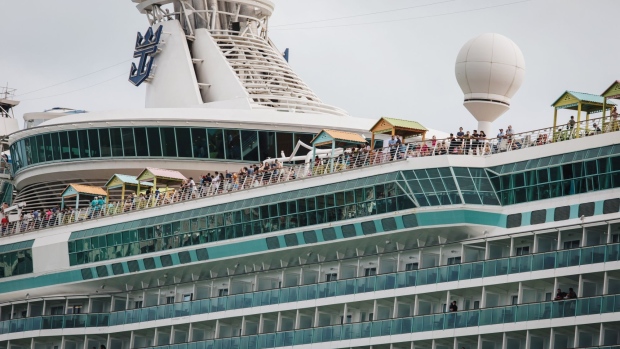 Passengers stand on board the Royal Caribbean Cruises Ltd. Navigator Of The Seas cruise ship at the Port of Miami in Miami, Florida, U.S., on Monday, March 9, 2020. At the world's busiest cruise port, thousands of vacationers paid little heed to a government warning that Americans should avoid setting sail on the massive ships. , Bloomberg

A cruise-industry health panel jointly convened by Royal Caribbean Cruises Ltd. and Norwegian Cruise Line Holdings Ltd. is recommending COVID-19 tests for all guests and crew members, part of a plan released Monday that the companies hope will clear the way to U.S. sailings.

The recommendation is one of 74 steps outlined by the so-called Healthy Sail Panel in a report submitted to the U.S. Centers for Disease Control and Prevention. According to the recommendations, guests must get tested between one and five days before boarding and show a negative result.

“We’ve always said we won’t start until we know it’s safe, but we think the panel has given us that pathway, and so we would start fairly quickly to assemble a crew and do all that,” Fain said, declining to give a specific date. “We’re hoping that would be soon.”

The panel also recommended once-daily temperature checks for guests and crew, updating air-conditioning systems and modifying ships to promote physical distancing, including through the removal of self-service buffets.

The companies are seeking a green light from the CDC to restart U.S. cruises. A CDC “no sail” order that prevents the companies from sailing U.S. waters expires at the end of the month, but the federal agency has previously extended the order.

Members of industry group Cruise Lines International Association -- including Royal Caribbean and Norwegian -- have suspended U.S. cruise operations until at least the end of October.

The industry shut down in mid-March after a series of outbreaks and fatalities on ships. Now, it needs to convince governments and customers that it can prevent another one of those episodes, which captured the world’s attention and used critical resources at a key time in the pandemic.

In the CDC’s latest “no sail” order, the agency said it had spent 38,000 person-hours on its cruise-ship response between March and July. In that period, it has identified about 3,000 COVID-19 or COVID-like cases on cruise ships and 34 deaths, and it said 80 per cent of ships in U.S. jurisdiction were affected by COVID-19 in the period.

Citing current scientific evidence, the CDC said cruise ships pose “greater risk of COVID-19 transmission” than other settings -- a conclusion that the industry has quibbled with even after the onboard outbreaks. The order specifically mentioned an article in the Journal of Travel Medicine, which concluded that the reproduction rate of the virus on Carnival Corp.’s Diamond Princess was about four times higher than in the early days of the virus in Wuhan, China.

Fain and Norwegian’s Del Rio said the return to the seas would be gradual. As the new guidelines suggest, the resumption would initially rely in part on trips to the companies’ private islands, where they can exert control over the environment.

Speaking in the same joint interview, the panel’s co-chairmen said the recommendations would significantly reduce risk, but couldn’t completely eliminate it.

The chairmen, former U.S. Food and Drug Administration Commissioner Scott Gottlieb and former Utah Governor Michael Leavitt, said a key to the return to the seas was planning for how to offload passengers in the event that the virus does reach the ships.

Outside his role on the panel, Gottlieb told CBS on Sunday that there would probably be at least one more viral cycle in the fall and winter, and that he didn’t anticipate a vaccine for general inoculation until late in the second quarter or into the third quarter of 2021.

Leavitt said Monday that the panel expected to incorporate feedback from the CDC. The companies will also be outlining specific procedures based on the panel’s recommendations.

“To those who are looking forward to cruising, this is an important milestone, but there’s still work to do,” Leavitt said.