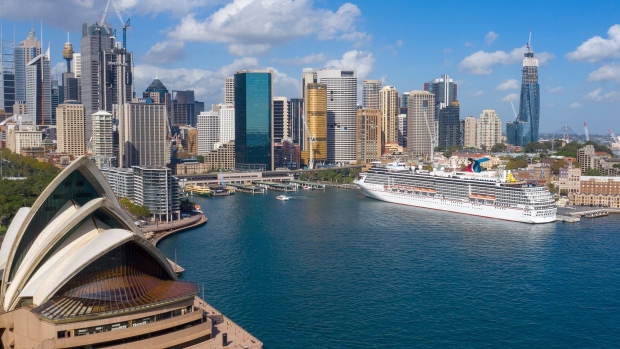 (Bloomberg) -- While hotels across the world are struggling to keep the lights on, the cruise industry is already planning for initial trips to depart in several weeks. Amid the Covid-19 coronavirus pandemic, however, that will look considerably different from what regular cruisers have come to expect. Among other changes, pre-boarding health checks and masks will be in, and self-serve buffets will be out.

Perhaps most notable, the first itineraries won’t get you to a different country each day. Post-pandemic sailing will stay closer to home—or at least, home port.

But first, given the early spread of Covid-19 among some ships’ passengers and crew, any line restarting cruises will have the daunting task of convincing customers that their health and safety will be sufficiently safeguarded.

The Centers for Disease Control and Prevention (CDC) currently has a no-sail order for U.S. waters aimed at ships carrying more than 250 passengers and crew, in effect until at least until July 24. This means that smaller, boutique ship companies will get to blaze a trail ahead of the major players.

“The fact that we only sail on domestic rivers has definitely provided a greater opportunity to resume our operations in a responsible, safe, and timely manner,” says John Waggoner, the founder and chief executive officer of American Queen Steamboat Co., whose American Duchess carries only 166 passengers and 70 crew down the Mississippi.

In announcing the company’s plans to return in late June with “Antebellum South” itineraries, Waggoner detailed new safety protocols that include pre-boarding temperature checks, limited-capacity shore excursions, and an end to self-serve buffets. These changes are likely to be echoed by big-ship cruise companies that have yet to reveal their plans. But guests on American Queen’s riverboats will have an additional benefit: quick, guaranteed access to regional U.S. health-care systems. Passengers who become sick or feverish at any point during their trip will be removed from the ship and transferred to a local hospital, ensuring better medical care and minimizing risk for other passengers.

Competitor American Cruise Line is also looking for a June restart on the lower Mississippi and along the Columbia and Snake rivers out west—initially operating two boats at 75% capacity with new health protocols in place, according to a spokeswoman. Those protocols include hourly sanitation rounds and the availability of full personal protective equipment, including face shields and gloves, for all passengers and crew. The company plans to sanitize all luggage before it comes on board, shift all dining away from buffets, and provide disposable covers for much-touched items such as TV remotes.

Cleaning standards reflect the most improvement, industry-wide. Colorado-based Avalon Waterways, which focuses on river sailings in Europe and Asia, is eyeing a September return; its ships have taken installation of electrostatic and UV disinfection systems that will help crews sanitize public spaces hourly. In Norway, Hurtigruten, whose ships also carry cars and cargo to remote coastal communities, says the line will add “hundreds of small and larger measures” to keep guests and crew safe and healthy—including reduced guest capacity, to allow for social distancing, and strict hygiene protocols. (The specifics of those measures have yet to be disclosed.)

The first and only big ship company to lay out enhanced health measures thus far has been Hong Kong-based Genting Cruise Lines. In April, it announced that its Star Cruises and Dream Cruises ships, which may start sailing as soon as July, will have infrared fever screening and sanitizing fogging protocols, whereby entire rooms will be sprayed with disinfecting mists. In addition, guests aged 70 and older will be required to have a doctor’s certificate stating they are fit to travel. (Crystal Cruises, also part of Genting’s portfolio, may set sail as soon as August, though it has made no announcements regarding health procedures.)

The U.S. focus on Mississippi River trips is part of a broader trend of regionalized, limited itineraries. In Europe, expect to see tried-and-true itineraries cut down to component parts. On the Danube, for instance, trips may stop short of Bratislava and Budapest, sticking to reopened Germany and Austria.  Even some ocean voyages will focus on a single country, such as Norway, where they’ll spend more time at fewer ports or out at sea. Across the board, the details of where people can sail and what they'll be able to do in the process are still being ironed out.

The focus on cruising in just one country isn’t entirely a response to border closures, though they present ongoing challenges. (In an extreme example, the Seychelles, off Africa’s east coast is banning cruises until 2022.) The first players returning to sea are reckoning with sparse air connections, which means cruisers eager to hop aboard need to be close enough to drive to departure points.

“It’s a lot like what happened immediately after 9/11,” says Andrew Coggins, a cruise expert and professor of management at the Lubin School of Business at Pace University. “Back then, ports of call suddenly became home ports because people were reluctant to fly.” In other words, cruise companies are diversifying departure points so more consumers can board a ship without having to board a plane.

Border closures present thornier issues for the industry’s giants, which helps explain why the most familiar names will take longer to return. A majority of these companies’ ships are registered outside the U.S., which subjects them to a 100-year-old U.S. law called the Jones Act. Under those provisions, foreign-flagged ships must include at least one international port of call for every U.S.-based voyage. That means that destinations that cruisers may feel comfortable with, such as  wide-open Alaska, will remain inaccessible, thanks to border closures in Canada, where such trips need to touch land.

While its operations remain grounded, the world’s largest cruise brand, Carnival Cruise Line, has also been busy developing its own approach to America, planning to link three Florida and Texas home ports to any Caribbean destination it’s allowed to visit. But that’ will depend on the CDC lifting its cruising ban in July—and Caribbean ports welcoming the vessels.

Both are questionable. Thus far, Carnival and its competitors, including Royal Caribbean and Norwegian Cruise Line, have been mum regarding their onboard health plans—or how they might handle future outbreaks. The CDC is expected to collect proposals from these companies about post-pandemic protocols before it issues new guidelines.

Pace University’s Coggins says the lines are probably watching as restaurants and movie theaters set the tone on best practices. Sit-down dining may replace buffets, and show productions may add matinees to allow for social distancing in shipboard theaters, he says. To deal with the possibility of a second wave of Covid-19 infections, “they may have to set up some kind of flying [medical] squad that can be airlifted to the ship,” Coggins adds.

Looking for “Normalcy” in Europe

In Europe, where border restrictions are starting to loosen, ocean sailings may resume with short itineraries no longer than a week, focused more on days at sea than visiting many ports. That’s according to Jens Skrede, managing director of Cruise Europe, a business-to-business network of ports and destinations.

Local and national authorities have yet to sign off on such plans. Even as international flights begin to fly between the EU’s Schengen countries, ocean cruising remains at a standstill. Skrede predicts that Baltic and Scandinavian ports will be among the first to turn on the lights. “In general, the Northern part of our region seems to have the Covid-19 situation a bit more under control,” he says, adding that sailings may not reach a critical mass until 2021.

Norwegian line Hurtigruten hopes to be the exception; it seeks to open tourism in its home country by mid-June and in the Arctic before the end of summer. “Step by step, the pandemic is being brought under control,” said CEO Daniel Skjeldam in a prepared statement. “Gradually restarting operations within Norwegian waters are natural first steps towards a normalization for us.”

The same is true for German line A-Rosa, which is looking to relaunch Rhine and Danube itineraries in June. Boutique line CroisiEurope may also fire up its 22-passenger barges in mid-July, focusing first in France, its home country. Says Michael DaCosta, the company’s general manager for North America: “As the year goes on, we will be able to open up more ships. But that depends on borders restrictions, local guidelines, and—of course—customer demand.”