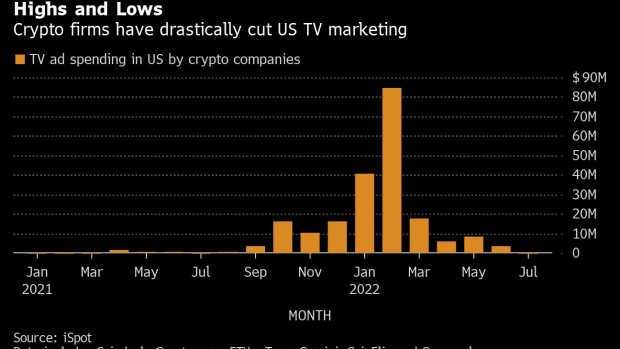 The drop in national TV marketing by the industry in the US has coincided with the selloff in Bitcoin and other crypto assets, according to the measurement company ISpot.tv Inc., which tracks the spots. Damon’s commercial for Crypto.com, which ends with him uttering “fortune favors the brave,” last aired in February during the Super Bowl. The four-month national campaign cost an estimated $65 million, according to ISpot, exceeding the outlays by others in investment services, including giants such as Fidelity and Vanguard, over the same stretch.

“Ad sellers shouldn’t expect growth in this vertical the remainder of the year due to the crash in crypto valuations and emerging allegations of fraud among companies in the crypto market,” said Eric Haggstrom, director of business intelligence at Advertiser Perceptions, an industry researcher. “Crypto has been a boom and bust industry since its inception, and advertising budgets will follow the same trajectory.”

Spending by major crypto firms, including the trading platforms Crypto.com, Coinbase Global Inc. and FTX, fell to $36,000 in July in the US, according to ISpot. That’s the lowest monthly total since January 2021 and is down from a high of $84.5 million in February, when the industry flooded the airwaves around the Super Bowl.

Coinbase, the only US publicly traded crypto exchange, said in a shareholder letter this month that it’s scaling back paid media. This came after second-quarter revenue sank 64% to $808.3 million.

Crypto companies have charted a similar path to other upstart industries, such as online travel sites, by pouring money into marketing to build brand awareness, according to Dave Morgan, founder and chief executive officer of Simulmedia, which operates an ad buying platform. The industry focused on live sports, including the NFL and NBA playoffs, that still draw big audiences.

“That's not the cheap way to get in,” Morgan said. “But it's a way to make a splash and let everybody know that you're there.”

But a lot has changed in the past six months. Bitcoin, the largest and oldest token, has lost about half its value since March. A raft of high-profile bankruptcies has weighed on confidence and trading volumes. Regulators around the world have also increased scrutiny. In all, the sector’s total market value fell below $1 trillion in June from a peak of $3 trillion in late 2021.

The decline in TV ad spending by crypto companies has also coincided with a lighter sports schedule since the end of the NFL season, America’s most-watched sport, in February. The overall investment-services category cut national TV outlays to $17.4 million in July, down 87% from February, according to ISpot. Over the same stretch, crypto firms slashed spending almost to nothing.

The biggest beneficiaries of crypto’s TV ad spending have been ESPN, ABC, Fox and NBC, according to ISpot. But even if the industry’s marketing doesn’t bounce back, the networks should be fine, according to Morgan. Demand for advertising during live sports will fill the hole, he said.

If crypto does return to TV in the fall, the messaging might change, according to Bill Daddi, president of marketing agency Daddi Brand Communications. So far, the advertising has centered on the fear of missing out and seizing the day. But it might shift to rebuilding confidence and education after all the tumult, he said.

“It'll be interesting to see how brands adjust,” Daddi said.