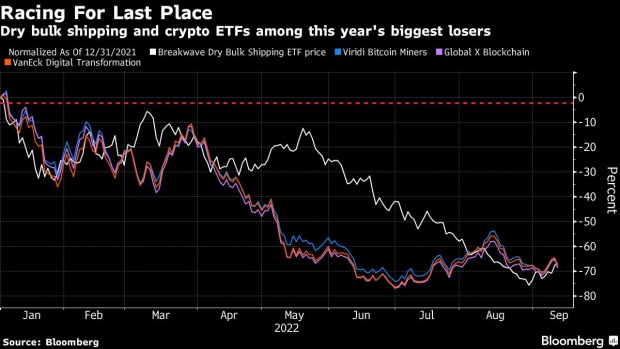 (Bloomberg) -- A historically aggressive Federal Reserve has put some of the exchange-traded fund industry’s previous high fliers in a race to the bottom.

The three worst performances this year among non-leveraged ETFs all belong to crypto funds, with the $6 million Viridi Bitcoin Miners ETF (RIGZ) claiming the top spot amid a nearly 69% nosedive. The $46 million Breakwave Dry Bulk Shipping ETF (ticker BDRY) -- which tracks a basket of dry bulk freight futures -- is sitting in fourth with a 67% plunge, after soaring 283% in 2021 as supply chains choked.

Fueling the wipeout is a central bank intent on stamping out the hottest inflation in a generation, even at the expense of economic growth. A series of supersized interest-rate hikes has drained the speculative froth from financial markets, leaving a trail of crypto-linked ETFs in the wake. At the same time, the cost of shipping has dropped as higher rates crimp demand for physical goods and supply chains unsnarl, dragging down the likes of BDRY after a blockbuster 2021.

“These areas were clearly prime beneficiaries of plentiful monetary and fiscal stimulus. Now, dry bulk freight futures and crypto are both suffering from the same malady -- a highly aggressive Fed,” said Nate Geraci, president of The ETF Store, an advisory firm. “The easy money party is over and both of these areas are now in the midst of brutal drawdowns.”

US inflation data Tuesday portends more pain ahead. The consumer price index climbed 8.3% in August versus a year earlier, above the median estimate, sparking wagers that the Fed might unleash a 100 basis point hike next week -- a move that hasn’t been seen since 1984.

Though the Fed’s quest to quell inflation has rocked nearly every asset class this year, crypto-flavored funds have been hit the hardest. After RIGZ, the $74 million Global X Blockchain ETF (BKCH) and the $35 million VanEck Digital Transformation ETF (DAPP) are both nursing year-to-date losses of about 68%, outpacing Bitcoin’s roughly 57% decline.

But even with the abysmal showings, all four ETFs are still sitting on net inflows so far this year, Bloomberg data show. Though BDRY’s total assets have more than halved from October 2021’s peak, the fund will likely always have a niche following among traders looking to wager on shipping rates, according to Bloomberg Intelligence’s Eric Balchunas.

“It’s either going to crush or be crushed,” said Balchunas, a senior ETF analyst. “It has an audience, small but real.”