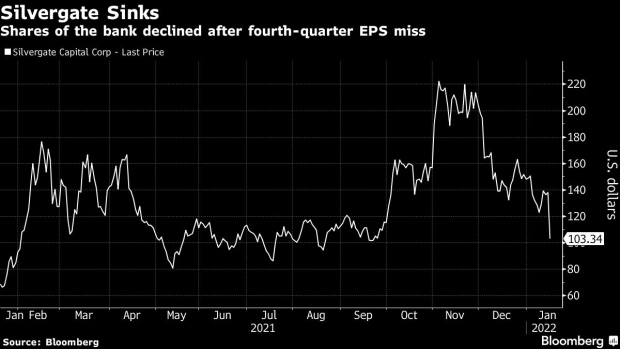 (Bloomberg) -- Silvergate Capital Corp. Chief Executive Officer Alan Lane said any launch of a U.S. central bank-backed digital currency is “likely years away” and he’s not concerned about the potential competition as the cryptocurrency-oriented bank gears toward issuing a dollar-backed stablecoin in 2022.

“If a U.S. CBDC (central bank digital currency) is launched and it is a direct-to-consumer, direct-to-retail CBDC, then that would essentially be competing with any other existing or proposed stablecoin out there,” Lane said on the bank’s fourth-quarter earnings call. But it’s unlikely the Federal Reserve would launch its own digital dollar any time soon, he added. “We’re not concerned about it at all -- we’re sitting here, ready to launch something in 2022.”

The Fed hasn’t said whether it plans to launch its own digital dollar.

The La Jolla, California-based bank has been a prominent player in the cryptocurrency industry, acting as a lender to companies that seek to borrow dollars against their crypto holdings. Stablecoins, pegged to traditional currencies, have become a vital part of the crypto universe because investors often use them to buy and sell other digital currencies. The Fed and other U.S. watchdogs have previously said stablecoins need more regulation and should be issued by banks, and Fed Chair Jerome Powell has said the Fed plans to publish a report on digital currencies in the coming weeks.

Silvergate, which intends to be an issuer of a U.S. dollar-backed stablecoin, said Tuesday that in the fourth quarter it updated an application with the New York Department of Financial Services to form a limited purpose trust company to hold dollar stablecoin reserves, a key part of its stablecoin strategy.

Last May, Silvergate announced an agreement to be the exclusive issuer of dollar-backed stablecoins by Diem, a Meta Platforms-backed group. On the earnings call, Lane declined to talk specifically about that effort, but said its strategy hasn’t changed and the bank views “commerce and remittance” as areas of opportunities for stablecoin uses.

Silvergate fell 25% on Tuesday after reporting earnings per share for the fourth quarter that missed the average analyst estimate. The one-day decline was the largest in almost two years.