Bitcoin plunged on Thursday in a sell-off that saw other digital assets fall more than 20 per cent, a slide likely to stoke speculation about the durability of the latest boom in cryptocurrencies.

The largest token fell as much as 14 per cent in Thursday trading, heading for one of its worst days since the pandemic-spurred liquidation in March.

The rout began just hours after Bitcoin rose to within US$7 of its record high of US$19,511, the culmination of a more than 250 per cent surge in past nine months. Fears over tighter crypto regulation and profit-taking after a frenetic rally were among the reasons cited for the sudden drop.

“News that the Trump administration may clamp down on crypto might have been a trigger for the drop,” said Antoni Trenchev, managing partner of Nexo in London, which bills itself as the world’s biggest digital-coin lender. “But any asset that rallies 75 per cent in 2 months and 260 per cent from the March lows is allowed to undergo a correction.”

Other coins including XRP tumbled as much as 27 per cent, according to prices compiled by Bloomberg.

After garnering more support from Wall Street money managers and fund providers, the rally in cryptocurrencies had looked over-heated. The fierce retreat could stir yet another debate over the their value in diversifying portfolios. 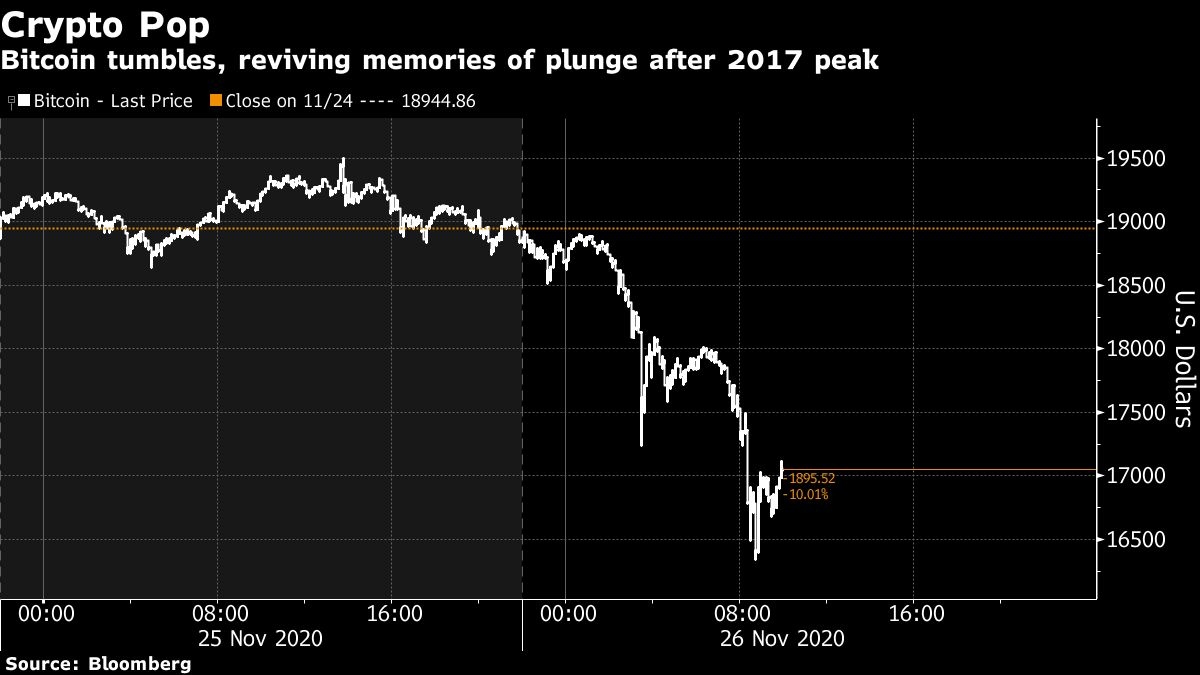 Last week we heard rumors that the U.S. Treasury and Secretary Mnuchin were planning to rush out some new regulation regarding self-hosted crypto wallets before the end of his term. I'm concerned that this would have unintended side effects, and wanted to share those concerns.

“Conditions are very massively overbought and bound for a correction,” said Vijay Ayyar, head of business development with crypto exchange Luno in Singapore. “So I don’t think it’s unusual.”

Crypto believers tout purchases by retail investors, institutions and even billionaires, as well as the search for a hedge against dollar weakness amid the pandemic, as reasons why the boom can last.

Skeptics argue the cryptocurrency’s famed volatility portends a repeat of what happened three years ago, when a bubble burst spectacularly. Some see signs of retail investors piling in to chase momentum for fast gains, storing up an inevitable reckoning.

“It’s also not unusual to see a short-term pullback following periods of significant, accelerated gains as traders look to take profits before resetting once volatility subsides,” he said. “Once the dust settles, we’re back to business as usual with all medium to long-term bullish indicators still in play.”

Proponents of digital assets say the current focus on cryptocurrencies compared with three years ago is different because of growing institutional interest, for instance from the likes of Fidelity Investments and JPMorgan Chase & Co.

There is also a buzz around Ethereum, the most-actively used blockchain in the world, which is set for a network upgrade that would allow it to process a similar number of transactions as Mastercard Inc. and Visa Inc. The shift to the new system could curb the total supply of Ether, whose price has quadrupled so far this year.

Luno’s Ayyar said he expects Bitcoin to stabilize and achieve all-time highs. But that would be followed by a larger drop in the cryptocurrency, he said.

“This is just a normal pull back after seven weeks straight of Bitcoin in the green, due to many people over-leveraging.”

--With assistance from Adam Haigh and Sam Potter.

Do you invest in Bitcoin or other cryptocurrencies?