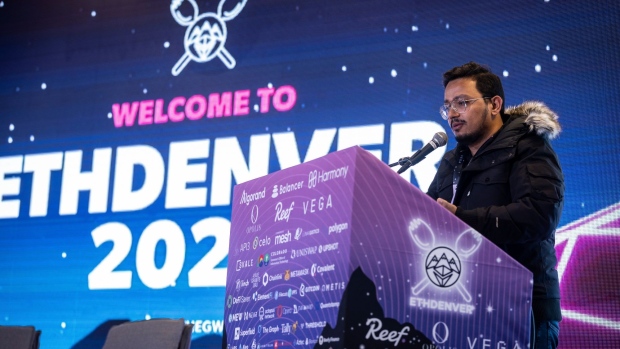 Sandeep Nailwal, co-founder and chief executive officer of Polygon, speaks during ETHDenver in Denver, Colorado, U.S., on Friday, Feb. 18, 2022. ETHDenver is the largest Web3 #BUIDLathon in the world for Ethereum and other blockchain protocol enthusiasts, designers and developers. , Bloomberg

(Bloomberg) -- India’s dithering on whether to embrace digital assets is causing thousands of developers, investors and entrepreneurs to leave for places with more friendly regulation, according to the co-founder of the country’s most famous crypto startup.

“The brain drain is absolutely crazy,” Sandeep Nailwal, whose Polygon operates the biggest so-called Layer 2 protocol for the Ethereum blockchain system, said in an interview from Dubai.

India, with an estimated 15 million active crypto users, has been stuck in regulatory limbo since the Supreme Court in 2020 overturned a central bank ban on digital tokens. The government this year unveiled a tax on crypto transactions without formally declaring that it won’t ban trading, a move that became emblematic of the confusion.

On Tuesday, Finance Minister Nirmala Sitharaman said the government has yet to make a final call on whether to ban virtual coins or regulate them. At the same time, she acknowledged the industry’s potential as a source of tax income: “Many Indians have seen a future in it, therefore I see a possibility for revenue in it,” she said. The government imposes a 30% tax on digital coin transactions.

Nailwal, who co-founded Polygon in 2017, relocated to Dubai two years ago. The emirate is aspiring to be a crypto hub for the Middle East -- just as it is for traditional financial services -- and on Wednesday, it adopted a law for regulating digital assets.

Read more: Binance Said to Be in Talks for License to Operate in Dubai (1)

Polygon’s eponymous protocol is used by developers to make Ethereum transactions cheaper and faster. It has some 7,000 decentralized apps (or dapps), more than 130 million unique users, and handles over 3 million daily transactions. In February, Polygon raised $450 million by selling its Matic token to investors led by Sequoia Capital India.

“I want to live in India and promote the Web3 ecosystem,” the 34-year-old said. “But overall, the way the regulatory uncertainty is there and how big Polygon has become it doesn’t make sense for us or for any team to expose their protocols to local risks.”

On the face of it, India has the potential to be a crypto powerhouse. The population of 1.4 billion people skews young, with a growing, well-educated middle class. That, combined with a less-developed traditional financial system, has led to the world’s second-highest crypto adoption rate behind Vietnam, according to blockchain research firm Chainalysis. Overall crypto transactions jumped 641% between July 2020 and June 2021, Chainalysis said in an October report.

China, the only country with a larger population, last year declared all cryptocurrency transactions illegal.

Governments around the world have long grappled with the need to tame the worst excesses of an industry beset by speculation, fraud and hacking incidents, while at the same time harnessing its explosive growth and potential for innovation. Countries from Singapore to the U.S. are now moving toward a more structured approach to regulating the sector.

Investors and entrepreneurs around the world have clamored for more clarity. Bitcoin surged as much as 11% on Thursday as word got out of an impending executive order from U.S. President Joe Biden to coordinate the government’s approach to crypto.

“Countries will keep losing new talent capabilities until the time they figure it out,” Nailwal said. “Crypto is very disruptive in the sense it has a potential not only to disrupt the concept of money but also the concept of government itself.”

Even as Indians embrace digital assets and the government warms to the potential for tax revenue, the industry still faces determined opposition from the central bank. And while it’s not uncommon for central banks to express skepticism toward crypto, the Reserve Bank of India’s criticism has been particularly withering.

Read more: India’s Central Bank Chief Says Crypto Is ‘Not Even a Tulip’

Edul Patel, the co-founder of Mudrex, an automated digital asset trading platform backed by Y Combinator, chose to set up his company in the U.S. in 2019 after the central bank cut off crypto-related businesses from India’s payment network. The central bank’s move was later reversed by the Supreme Court.

Right now, many Indian crypto companies, developers and founders are trying to move to places like Dubai, Patel said in an interview. One selling point for Dubai is its “sandbox approach,” something India lacks for crypto, he said. Governments often use so-called sandbox setups as a testing ground for promising but unproven financial technologies.

“I’ve often heard the joke that Dubai is the best city in India,” said Nitin Sharma, the Bengaluru-based founding partner of venture capital firm Antler, which plans to invest in Indian startups focused on blockchain and Web3 applications. “And once you have well-known founders or startups move, it starts to attract many others, creating a community.”