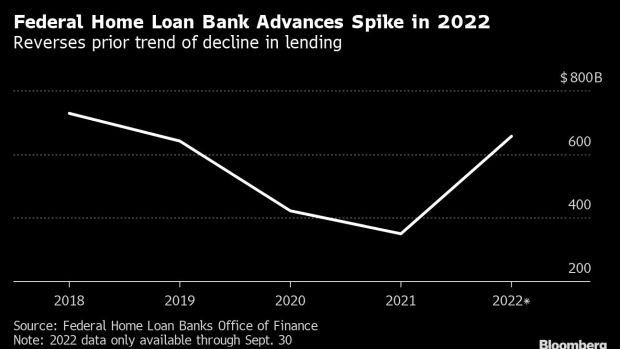 (Bloomberg) -- A Depression-era backstop that Wall Street banks use for short-term funding is the latest corner of traditional finance to be ensnared by upheaval in the crypto industry.

For decades, the Federal Home Loan Bank System has been a preferred option for lenders in need of cash. But recent revelations that some of the money went to crypto-friendly banks after the collapse of digital-asset exchange FTX is stoking concerns of mission creep, with funds going far afield from the home loans that the program was originally designed to boost.

Each year, US lenders tap the FHLBank System to borrow hundreds of billions of dollars at rock-bottom rates and without the stigma of seeking help from the Federal Reserve. It’s widely seen as a safety net during crises and economic downturns and has been dubbed the “lender of next-to-last resort” — a play on the nickname for the Fed’s famed discount window.

The wonky public-policy debate over the role of FHLBanks is now morphing into a political one after crypto-friendly financial firms Silvergate Capital Corp., Signature Bank and Metropolitan Bank Holding Corp. said recently that they received loans. The disclosures dovetail with warnings from top regulators that crypto could eventually threaten the financial system.

“This is the most attention they have gotten in years,” Michael Bright, chief executive officer of the trade group Structured Finance Association, said about the lenders. “It’s a strange irony. You have a lot of banks that access the FHLBs, but aren’t using advances for mortgage liquidity,” said Bright, a former interim head of Ginnie Mae.

Backers of FHLBanks note that in nine decades the system has never experienced a loss on its loans, which are known as advances and must be fully collateralized with certain assets, including mortgage or government-backed securities. Still, critics are upset that financial giants routinely tap the funding source — originally set up under President Herbert Hoover to bolster mortgage lending — for their short-term funding needs.

Although FHLBanks aren’t government lenders, their debt is seen as implicitly backed by the US because they have a line of support from the Treasury Department.

Even before FTX’s collapse in November, the FHFA was conducting a sweeping reassessment of the banks, called the “FHLBank System at 100.”

That review is ongoing, the regulator said in a statement. It added that it expects the 11 FHLBanks scattered across the country “to thoroughly underwrite advances, to include an assessment of the financial condition of FHLBank members to which advances are made” and to be in communication with watchdogs over any issues.

As of Sept. 30, FHLBanks had more than $650 billion in loans outstanding. That’s up from about $350 billion at the end of 2021, and a sharp reversal of an overall downward trend in their lending activity.

A representative for FHLBank San Francisco, which lent to Silvergate, and one for FHLBank New York, which provided loans to Signature Bank and Metropolitan Bank, both said they conduct continuous assessments of each member’s creditworthiness and financial condition. The officials added that loans are made in line with appropriate risk-management practices.

FTX’s implosion, which continues to mushroom across crypto markets, isn’t the first time that the program has come under fire.

FHLBank officials began to coordinate more with bank supervisors after the system drew criticism for advancing tens of billions of dollars to Countrywide Financial during the financial crisis as the firm churned out bad loans, according to Timothy Yeager, a professor at the University of Arkansas and former Fed economist.

At the time, Charles Schumer, a Democrat from New York who is the Senate majority leader, said that Countrywide was using an FHLBank as its “personal ATM.”

Shoring up banks hit by a crypto crisis represents a further deviation from the program’s original intent, according to Todd Baker, a senior fellow at Columbia Business School. “The question is: Should the Federal Home Loan Bank be participating in a transaction with a highly risky bank that has no mortgage business?” he said.

Silvergate, Signature Bank and Metropolitan Bank all satisfy capital requirements set by regulators. Separately they have also said that the fallout from the FTX implosion hasn’t put that at risk.

Silvergate has said that FHLBank loans were part of the “wholesale funding” it tapped to deal with outflows. The bank declined to comment on whether it would continue to use the program to manage liquidity.

Signature Bank said it was reducing deposits from digital-asset customers as part of a previously announced plan, and the FHLBank advances it got replaced those deposits short-term.

The bank also said its activities align with the mission of the FHLBank program, pointing out that in 2022 Signature originated more than $5 billion in multi family assets, or properties that house a number of residential units. About $18 billion out of $19 billion of the bank’s multi family portfolio is tied to loans in low and moderate income areas, it said, adding that it also supplies tax credit financing for affordable housing in New York City.

Metropolitan Bank recently announced that it would stop working with crypto firms. Although it said it tapped FHLBank loans for the first time in more than a decade late last year, the bank hasn’t said it was to deal with the fallout from FTX.

“The $100 million of FHLB advances from the fourth quarter of 2022 partially funded over $200 million in loan growth and were repaid in early January 2023,” Mark DeFazio, the bank’s president and CEO, said in a statement.

Regardless of the purpose, loans to banks that have been involved in crypto raised the stakes for the review of the program by the FHFA.

“While loan advances have to be collateralized by certain assets, there’s a lack of any real statutory constraint on their use,” said Mark Calabria, who led the Federal Housing Finance Agency, the FHLBanks’ regulator, during the Trump administration. “Money is fungible. Certainly it makes sense for Congress to examine this long-standing arrangement,” added Calabria, who’s now an adviser at the Cato Institute, a libertarian think tank in Washington.

The revelations have also thrust FHLBanks into the crosshairs of lawmakers, who have long expressed concerns that the digital-asset industry may grow ever more intertwined with the US financial system. Senator Elizabeth Warren, a Massachusetts Democrat, said she was worried about “the dangers of crypto seeping into the banking system.”

Sherrod Brown, the Ohio Democrat who leads the Senate Banking Committee, also said he was concerned. “This issue is bigger than one case or company,” he said in a statement. “I’ve been concerned that when banks get involved with crypto, it spreads risk across the financial system.”

--With assistance from Sally Bakewell.

(Updates with details about Signature Bank’s lending in 19th paragraph.)