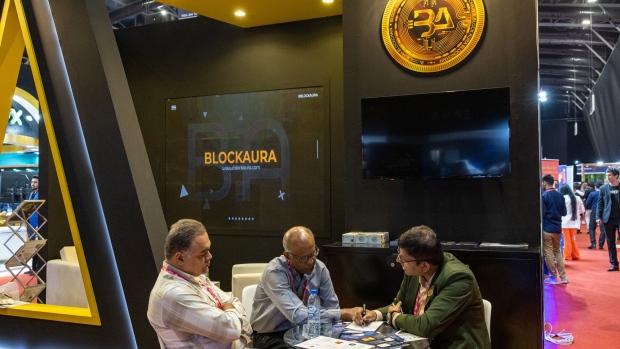 (Bloomberg) -- Sanjay Kamble hit the jackpot when an obscure token he’d invested in surged about 3,100% in eight months. He ditched his dead-end marketing business this year and became a full-time crypto evangelist.

These days, the 51-year-old drives around in his new Toyota sedan — one he couldn’t afford a year ago — on the dusty streets of his home town in rural India, showing off his success from investing in BlockAura tokens. He exhorts farmers, teachers, housewives, friends, relatives and neighbors to join him, promising that their investment would grow threefold in 300 days.

“I don’t need a day job,” Kamble said on the phone from Sangli, about 230 miles southeast of Mumbai. “BlockAura is the next Bitcoin.”

Kamble is among thousands of investors in India betting crypto is the quickest way to get rich, lured by a raft of startups promising yields as high as 25% a month in so-called staking rewards in a market with lax regulations. These are payoffs for investing in largely illiquid tokens and referral bonuses for adding more people into what are typically multilevel marketing networks. The mouthwatering returns are too good to ignore in a country where the annual per capita income is among the lowest in the world. Critics such as Pranjal Daniel at Strategy India warn some of these networks often turn out to be pyramid schemes.

The digital asset Kamble is touting is already showing signs of trouble, reflecting the wider meltdown in the crypto universe this year. The recent collapse of Sam Bankman-Fried’s sprawling FTX empire and the turmoil it sparked is spreading to other companies as well. Crypto lender BlockFi Inc. filed for bankruptcy this week, while brokerage Genesis is seeking to avoid a similar fate. But industry defenders such as Changpeng “CZ” Zhao, the founder of the world’s largest crypto exchange Binance Holdings Ltd., have said this isn’t the end.

BlockAura’s native token, called TBAC, has tumbled 90% to $3.03 from its all-time high of $32.30 in July, according to CoinGecko, an aggregator of token prices. On PancakeSwap, it’s trading at $3 apiece with a seven-day volume of just $20,000, while on UniSwap, it can be exchanged with another token for around $19 a piece, though there isn’t much trading there.

Following the plunge, BlockAura has capped daily withdrawals at an equivalent of $250 to prevent panic selling. It has imposed conditions so onerous that many investors can’t even cut their losses and exit altogether. That means Kamble’s claimed daily income of $2,000 — through staking, referrals and tokens earned from reinvesting — is worth much less now, at least on paper.

Kamble is undeterred and is betting that TBAC will surge to $10,000 in two to three years.

The rush for quick bucks is turning many investors blind to warnings of elevated risks from some of the biggest names in finance: JPMorgan Chase & Co. Chief Executive Officer Jamie Dimon in September described cryptocurrencies as “decentralized ponzi schemes,” while the Monetary Authority of Singapore in August called such investments “highly hazardous.” India started taxing crypto transactions this year in a bid to track deals and broadly to discourage trading. Finance Minister Nirmala Sitharaman has said the biggest risk for countries is the potential misuse of cryptocurrencies for money laundering and terror financing.

The multilevel marketing model based on referral fees — where tokens are staked primarily within those networks — is highly risky. Investors earn in less liquid, native tokens that are susceptible to price volatility at the time of withdrawal. BlockAura Foundation founder Firoz Multani said his platform adopts a network-marketing, but not a pyramid, model, and incentives for referrals are mainly used to expand the user base, he said. Profit can fluctuate depending on the price of the token, but there’s no risk of losing capital, as staking returns distributed within the community help earn back the principal within five months, he said.

Besides BlockAura, SBG Global and ApeJet are among the other Indian startups that have emerged in the past year or so.

Started in 2021, BlockAura now has 60,000 investors, according to Multani, a Dubai-based Indian man. SBG Global, founded by real-estate developer Anil Yadav, offers three times returns in 20 months and boasts more than 100,000 users. ApeJet, a relatively new entrant, dangles freebies from iPhones to villas worth $605,000 in Dubai as enticement.

None of these startups has been accused of any wrongdoing, but experts including Ari Redbord, head of legal and government affairs at San Francisco-based blockchain intelligence firm TRM Labs, warn that such get-rich-quick chains only heighten risks of deceit.

“There’s arguably unnatural exuberance in the space and lots of people have been overtaken by the fear of missing out,” said Redbord. “That’s a recipe for scams and frauds” broadly in this space, he said.

About 60% of SBG Global’s users are part of its multilevel marketing model, and the platform does have a plan to tackle potential risks by offering diverse products, its international marketing head Praveen Rai said. ApeJet founder Mayank Dudeja didn't respond to messages and phone calls seeking comment.

India has seen its share of crypto frauds in recent years. In 2018, a police probe found that more than 25,000 investors were duped, while the nation’s top court is hearing a case on an alleged fraud worth about $1.6 billion at current prices. BitConnect, a global scam worth around $2.4 billion, had its roots in India.

"The amazing thing is these companies are able to function without regulation," said Mark Mobius, co-founder of Mobius Capital Partners. "Regulators have a big problem," he said, adding crypto doesn't have any geography, "you can't put your hands on it, it's in the atmosphere."

The Reserve Bank of India doesn’t see a crisis yet, according to Deputy Governor T. Rabi Sankar. Though researcher Chainalysis ranks India No. 4 in the world in crypto adoption, Sankar said a very large proportion of investors have tiny stakes. Still, it routinely cautions the public about the risks.

“What we need is a globally coordinated approach,” Sankar said in an interview in Singapore, echoing the Indian government’s stance. “No one wants a situation where people lose their savings.”

Risks are even more pronounced, given the nature of multilevel marketing networks, said Daniel, chief strategist at Strategy India, a Mumbai-based consultancy that studies fraudulent schemes.

“What is distinct about MLM and other ponzi schemes in crypto is the tokenization process, and the ability to spin up new coins at whim, market these as revolutionary, drive up prices, and then abscond with the proceeds,” said Eric Jardine, Cybercrimes Research Lead at Chainalysis.

Apart from the daily limits, BlockAura has told its investors that it works on the basis of a value of $61 per token — far more than the prevailing market price — meaning users will pocket less cash when they redeem their rewards. TBAC is currently in test mode. It was scheduled to go live last month, but that’s been postponed. BlockAura has also launched multiple versions of the token at higher prices.

Some disgruntled users are speaking out. Akhilesh Agarwal, 52, had invested $10,000 in BlockAura tokens in May and accumulated $25,000 in rewards over the next four months. The curbs mean his entire principal is wiped out, he said, adding he quit in November.

“I got duped, I don’t want to dupe more users,” he said from New Delhi. “Only a handful of people made money at the start when the price of the token was rising. Now we can’t withdraw and everyone’s money is stuck.”

Multani rejected such complaints, adding the withdrawal limits are temporary. “Those who believe in BlockAura and know that the coin will touch $100 within a year will stay,” he said. “TBAC is a store of value. My goal is no one should lose money.”

Some users shared what they claimed to be thousands of success stories similar to Kamble’s. “You need to have the stomach to take risk if you want high returns,” said Saurav Kumar, 33, who’s put his full faith in SBG Global, after losing money in another networking blockchain.

Yashveer Chauhan, 21, a college student and an ApeJet investor, won a new Kia Sonet compact SUV as reward for bringing in more investors to the chain, a few months after bagging an iPhone. “There’s no loss in this scheme as the community will support the token,” he said.

The three blockchain firms flew hundreds of their high-performing users from India to Dubai in October as part of their rewards program, showcasing them at an industry event in a bid to entice more overseas. For SBG Global and BlockAura investors, this was their second international trip in about three months after a visit to Singapore in June and July, where they filled half the conference room at a high-end hotel and cheered on the founders.

“The rewards are to help build the community,” said Yadav, founder of SBG Global, who invests customers’ money in real estate, foreign-exchange and crypto trading to earn those returns. “One who has community will win.”

--With assistance from Vrishti Beniwal.