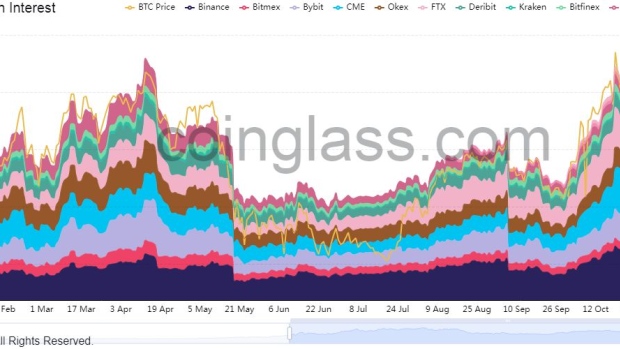 (Bloomberg) -- As Wall Street traders bedded down for the weekend after the stock volatility last week, Nikita Fadeev in London was woken up by a Bitcoin market alarm at 4:55 a.m.

Thanks to the cell-phone notification on Saturday morning, the head of cryptocurrency hedge fund Fasanara Digital was back at his desk as the world’s biggest token plunged 20% in an hour.

For all the talk about the allure of cryptocurrencies to diversify portfolios, Bitcoin proved susceptible to a textbook flight to quality -- dropping as low as $43,000 after speculative stock favorites sold off last week on monetary-tightening fears.

“When things set in motion, we got this cascade of liquidations as it always happens,” Fadeev said. “It’s quite an unstable situation. A lot of the guys went risk-off and crypto is very obviously a risk-on asset so that’s the chain reaction.”

The entire crypto complex erased as much as $480 billion Saturday before rebounding to $2.2 trillion. Bitcoin is down again Monday at around $48,700 and the ProShares Bitcoin Strategy ETF dropped about 9%.

Wall Street pros and day traders alike are grappling with the ever-tightening links between crypto and mainstream markets: Whether it’s the YOLO cohort trading in and out of meme stocks to whipsaw hedge funds, or institutional players driving Bitcoin ups and downs to catch the retail crowd off guard.

Both groups are confronting a cross-asset regime shift unthinkable just a year ago as the Federal Reserve pares pandemic stimulus to fight inflation.

“A big part of the new money and rally over the past 18 months has been Bitcoin buying with a monetary-debasement lens by the TradFi world,” said David Fauchier, who runs a multi-strategy crypto quant fund at Nickel Digital, referring to traditional finance. “The newsflow in the past couple of weeks is a big challenge to that.”

The Bloomberg Dollar Index is not far off July 2020 levels as short-term borrowing costs rise on expectations for Fed tapering.

In the telling of Fauchier and the like, the Saturday selloff kicked off with TradFi investors turning risk-averse, leading to divestments at over-the-counter desks. Throw in thinner liquidity during late-night hours in the U.S., and a classic crypto liquidation frenzy ensued.

Funding rates in crypto futures turned negative over the weekend, meaning short traders were paying a premium to hold their positions in a sign of bearish sentiment. In Bitcoin contracts on FTX, the rate has turned positive, though they remain below zero for a slew of coins like Solana and Binance Coin.

On the plus side, there are signs some of the leverage has been flushed out of the system -- indicating narrower room for another sharp drop. Outstanding Bitcoin futures slid from nearly $23 billion on Friday to $16.5 billion currently, the lowest since early October, Coinglass data show.

But the 10 biggest Bitcoin deposits on exchanges now make up 95% of all deposits on a 72-hour average basis, an indication large crypto holders may be selling their tokens, according to Ki Young Ju, chief executive officer at CryptoQuant.

“The poor sentiment in the riskier pockets of the broader markets was what caused crypto to eventually fold,” said Martha Reyes, head of research at crypto prime brokerage Bequant. “Hedge funds and retail investors who invest in Tesla options and the like may also be the same ones who play with leverage in crypto.”

Correlation charts increasingly show the latter story: Since August, Bitcoin has consistently posted a positive 50-day link with the relative performance of volatile S&P 500 stocks. All that means traditional assets are now having a bigger sway on crypto now that institutional flows have increased. As such, Bitcoin is looking more like a risk asset than an inflationary hedge.

Much now depends on the extent to which U.S. policy tightening snuffs out the speculative euphoria embedded in a slew of investing strategies.

“The market is still fragile here, and as long as we’re not back in the $53,000 or $54,000 area -- historical volume cluster -- it will remain the case,” Felix Dian at crypto hedge fund MVPQ Capital wrote in an email.