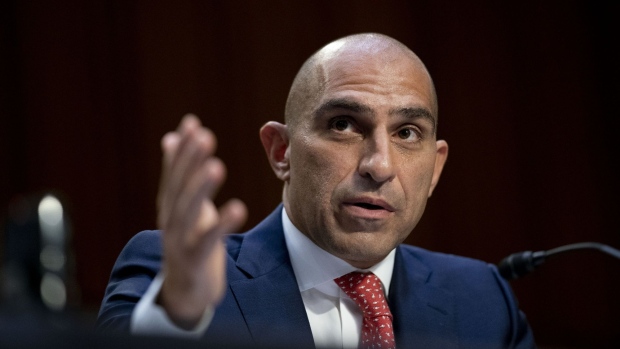 Rostin Behnam, chairman of the Commodity Futures Trading Commission (CFTC) nominee for U.S. President Joe Biden, speaks during a Senate Agriculture, Nutrition and Forestry Committee confirmation hearing in Washington, D.C., U.S., on Wednesday, Oct. 27, 2021. Behnam has been leading the agency on an interim basis since January, which oversees much of the $582 trillion global derivatives market including cryptocurrency trading. , Bloomberg

(Bloomberg) -- The nominee to lead the U.S.’s top swaps regulator has a warning for lawmakers: Crypto misconduct the agency has already exposed is “the tip of the iceberg” and it likely needs more authority to police the white-hot market.

Rostin Behnam, the Biden administration’s pick to head the Commodity Futures Trading Commission, said the explosive growth of digital tokens means Congress might have to step in to ensure the watchdog has the tools it needs to crack down. The CFTC has closely scrutinized the industry since green-lighting Bitcoin futures in 2017. But its powers are mostly limited to overseeing derivatives.

“We’ve been one of the few cops on the beat because of limited statutory authority related to anti-fraud and anti-manipulation,” Behnam, who has been serving as the CFTC’s acting chairman since January, said Wednesday during his confirmation hearing before the Senate Agriculture Committee. Lawmakers should “consider expanding the authority for the CFTC.”

Behnam’s request comes as regulators jostle over jurisdiction. Securities and Exchange Commission Chair Gary Gensler has garnered attention for his aggressive comments that many virtual currencies are securities that should be registered with his agency. The White House is also weighing an executive order that could serve as a blueprint for regulating the market across the government.

In his testimony, Behnam said almost 60% of the $2.7 trillion digital asset market consists of commodities. His agency and the SEC would work together to regulate the market, he said. But the the Senate Agriculture Committee should consider expanding his CFTC’s jurisdiction further because of the industry’s size, its appeal to retail investors and threats it potentially poses to financial stability, Behnam said.

“It’s critically important to have a primary cop on the beat and certainly the CFTC is prepared to do that,” he said.