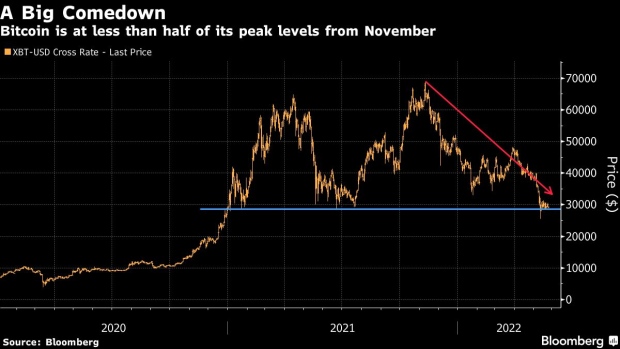 (Bloomberg) -- The steep drop in cryptocurrencies and the recent implosion of a $19 billion stablecoin aren’t enough to label the sector a threat to broader markets, said Evercore ISI strategist Julian Emanuel.

The collapse of the TerraUSD stablecoin earlier this month spurred a debate about whether blowups of crypto experiments could pose a risk to the wider financial system, along with calls for stronger regulation. Stablecoins are a key cog in the digital-assets system, serving as a stand-in for regular cash, and they’re explicitly designed to hold their value.

When Terra tumbled from its dollar peg, it sparked a cryptocurrency selloff that hit even Tether, the biggest stablecoin. Even so, the crypto industry isn’t yet at the stage where it risks triggering wider market turmoil, according to Emanuel.

In a research note dated May 22, Emanuel and two colleagues cited the US railroad crash that followed the so-called Panic of 1873 as an example of an industry shakeout that laid the foundation for longer-term prosperity.

“At this point, we think it is too early to believe that Crypto could become a systemic issue like the railroads were in the 1870’s,” he said in an emailed response to questions. “For Crypto to really become a “systemic issue” will require a loss of faith in the “store of value” concept as well as the “medium of exchange” concept.”

Many regulators beg to differ. The increase in size and complexity of crypto markets puts them on track to become a risk to financial stability that must urgently be regulated, the European Central Bank said in a pre-released chapter from its financial stability review on Tuesday.

“Based on the developments observed to date, crypto-asset markets currently show all the signs of an emerging financial stability risk,” the central bank said. “As this is a global market and therefore a global issue, global coordination of regulatory measures is necessary.”

Industry proponents like Andreessen Horowitz’s Chris Dixon have argued in recent days that industry swoons like the current one tend to serve as springboards for new technological leaps. Emanuel echoed that view, referring to the dot-com crash of the early 2000s, which eventually gave way to giants like Facebook and Twitter Inc.

Crypto’s role in providing the “building blocks” for 21st-century finance “will take much longer (if ever) to dissipate,” Emanuel said in the email. “It didn’t dissipate with respect to the Railroads.”