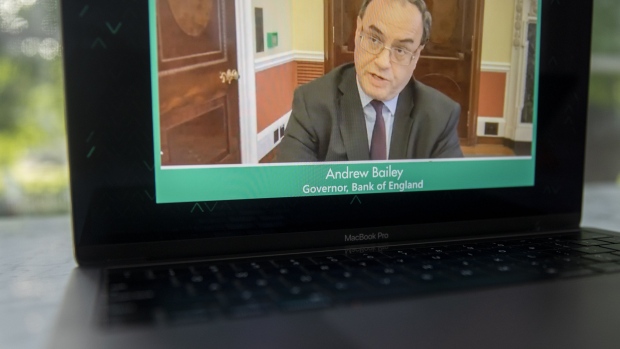 Andrew Bailey, governor of the Bank of England, speaks during the Jackson Hole economic symposium seen on a laptop computer in Tiskilwa, Illinois, U.S., on Friday, Aug. 28, 2020. This year investors can listen directly during the Federal Reserve Bank of Kansas City's annual event because it will be conducted virtually due to the coronavirus pandemic and streamed live to the public for the first time. , Bloomberg

“They fluctuate in value substantially,” he told a virtual conference on Monday. “Which is why they’re on the whole not a good medium for making payments.”

The latest price swings appear to underscore his remarks. Bitcoin, the world’s largest crypto, has rallied about 9% since Friday after losing about 30% since mid-April. Elon Musk, whose comments have whipsawed the market, said via tweet over the weekend that Tesla Inc. would allow transactions in Bitcoin once mining is done with more clean energy.

Bailey has emerged as a prominent critic among central bankers of the coins. Less than a month ago, he said there was a danger of “getting carried away” with financial innovation.

On Monday, he reiterated his warning that people who want to buy the coins should be prepared to lose their money.

“Given the volatility of the asset value, and given the fact that there isn’t a real asset underpinning them, I’m afraid if you want to buy them then please understand that you can lose, you could lose all your money,” he said.

“Now, I’m not saying you will. That’s not the point. But you could, because there isn’t a real thing underpinning them.”

The BOE, along with the U.K. Treasury, are weighing the potential creation of a central bank digital currency, joining authorities from China to Sweden exploring the next big step in the future of money.

“We’re going to engage with users, the technology sector, to understand the potential for these things,” Bailey said. “And there’s a lot of work going on in the Bank of England to understand the implications of them for central banking.”