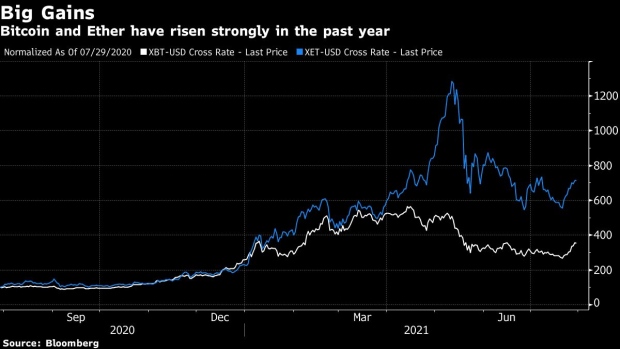 Fundraising by cryptocurrency companies has seen a rapid rise in valuations as large investors push up prices, according to professional services firm PwC.

Boutique firms and family offices are being elbowed out by big venture-capital names, private equity players and even some pension funds, PwC Crypto Leader Henri Arslanian said in a phone interview Thursday. Smaller venture capital firms are unhappy, he added.

“Let’s say they’re looking at a deal and they believe it’s worth $10 million, and you’re seeing large VCs come in and put a bid in for a higher valuation,” he said. “This is happening a lot with very early-stage companies, say, $5 million to $20 million -- the prices are being inflated.”

Crypto deals have heated up in recent months after gains in digital currencies and as investors debate the future of the asset class. Crypto M&A was about $3 billion in 2020 and a similar amount was probably raised in the last two to three months alone, Arslanian said.

In July, derivatives exchange FTX raised $900 million from Softbank Group Corp. and others, valuing it at $18 billion. Digital-asset platform Fireblocks took in $310 million to attain a value of $2 billion.

Challenges include how to discount for regulatory risk in such a new area and how to assess the valuation of businesses where many are only a few months or years old, Arslanian said. Another issue is lack of suitable assets to invest in, given many firms aren’t that big or well-developed yet.

“If your minimum ticket size is around $50 million, there aren’t that many companies that have that status yet,” he said. “If you’re a large pension fund and you decided to make a crypto allocation, there are no more than two dozen companies around the world that are investable, looking for capital and could absorb $100 million.”