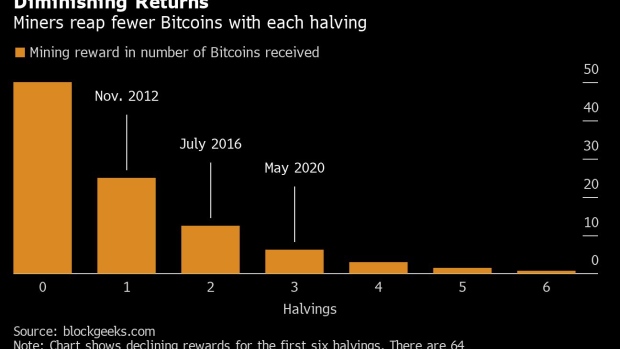 (Bloomberg) -- A crisis was supposed to be Bitcoin’s time to shine, when the need for an international currency outside the reach of central banks would prove invaluable. That hasn’t been the case.

No matter to crypto die-hards. The future is brighter than ever, especially as central banks around the world pump cash into listing economies, threatening a wave of inflation if growth were to snap back.

That’s when Bitcoin, with its finite supply, will become coveted, say some of its most prominent mainstream backers including Tyler Winklevoss, Mike Novogratz and Paul Tudor Jones.

The argument hearkens back to the token’s origins. Bitcoin’s halving, which happened on Monday and cut in half the rewards miners receive, has long been seen as a guard against inflation. What’s giving the argument new life right now is today’s economic backdrop. With the coronavirus pandemic wreaking havoc in nearly every corner of the world, central banks are dispensing gargantuan stimulus measures to buttress markets and the global economy.

“The rest of the world needs to either keep printing money or see their own currency eroding drastically in front of the unbeatable dollar,” said Jean-Marie Mognetti, chief executive officer of CoinShares, a digital asset manager. “Bitcoin, a digital currency whose supply is programmatically defined to reduce until it reaches its maximum supply, would seem to be the perfect hedge for any institutional investor portfolio.”

This week’s halving was Bitcoin’s third. The supply cut has become an appealing feature for investors who are fearful that fiat money can lose its value to inflation if too much is printed. It is also meant to prevent inflation by acting to periodically slow the pace at which Bitcoin are created through 2140 so as to not outstrip demand.

Meanwhile, major central banks have slashed interest rates and ramped up bond buying while governments have dedicated more than $8 trillion in stimulus to cushion the coronavirus blow. With the U.S. economy sustaining a massive hit, the Federal Reserve has unleashed a raft of packages aimed at reducing market stresses. Its balance sheet has ballooned to more than $6 trillion and, by some estimates, could top 50% of gross domestic product by the end of the year.

That’s pushed many new converts toward cryptocurrencies. While Galaxy Digital’s Novogratz has been emphasizing the argument for a while, macro investor Jones of Tudor Investment Corp. caused a splash when he acknowledged buying Bitcoin as a hedge against the inflation he sees coming from central bank money-printing. “We are witnessing the Great Monetary Inflation -- an unprecedented expansion of every form of money unlike anything the developed world has ever seen,” Jones said.

To Simon Peters, crypto-asset analyst at eToro, Jones’s foray means more high-profile names could come out in support of Bitcoin, “especially in an environment of unlimited QE and the potential for negative interest rates.” The token is gaining more support as an inflation hedge, says Peters, who sees it reaching a new all-time high in the $20,000-$50,000 range within 18 months.

Gavin Smith, chief executive officer of Panxora, a cryptocurrency consortium, also remains unbowed. “While traditional markets grow uncertain, we can expect more investors to use Bitcoin as an inflation hedge and to protect their assets against currency devaluation,” he said.

But while there is no doubt the coronavirus has had devastating effects on the world economy, its impact on inflation is still under debate. In the near-term, the virus has acted as a disinflationary force. U.S. inflation slowed sharply in March and a key measure of consumer prices declined in April by the most on record. Still, some Wall Street mainstays, including Morgan Stanley, are arguing it could herald the return of accelerating inflationary pressures, though those calls fly in the face of an emerging consensus that the looming global recession will deepen disinflation trends.

The divide over inflation’s track ahead is stark. Take, for instance, a Deutsche Bank research report titled “Life After Covid-19,” in which the firm’s Oliver Harvey lays out the case why the outbreak will lead to a return of inflation in developed markets. Harvey cites macroeconomic policy, political preferences and structural trends. On the other hand, Robin Winkler and George Saravelos argue the opposite -- in the same report. “Once deflation takes hold, even in the short-term, it can become self-perpetuating in the long-run,” the pair wrote.

To Jerry Braakman, chief investment officer of First American Trust, in Santa Ana, California, buying Bitcoin as an inflation hedge might make sense should inflation shoot up -- but a lot depends on timing.

“If inflation takes off, then people would look at things that keep a store of value and Bitcoin has some of that functionality,” he said. “The problem with that argument now is where is inflation going to come from? There’s no demand or cost pressures to push inflation higher so how are you going to get inflation in this environment?”