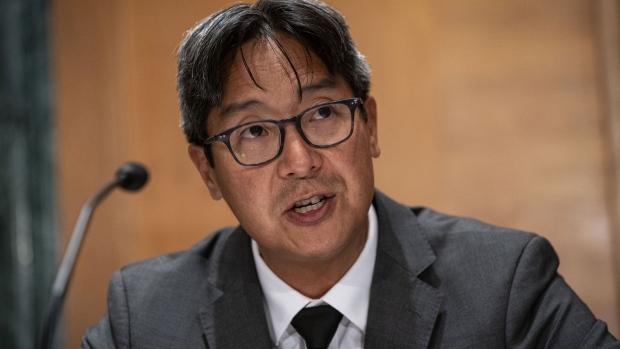 Michael Hsu, acting Comptroller of the Currency, speaks during a Senate Banking, Housing, and Urban Affairs Committee hearing in Washington, D.C., U.S., on Tuesday, Aug. 3, 2021. The hearing is titled "Oversight of Regulators: Does our Financial System Work for Everyone?" , Bloomberg

(Bloomberg) -- The U.S. agency that had once been the great hope of the cryptocurrency world is now issuing strong warnings to the industry that it’s in danger of echoing the toxic culture before the 2008 financial crisis.

Michael Hsu, the acting chief of the Office of the Comptroller of the Currency, argued Tuesday that cryptocurrencies and decentralized finance may be evolving into threats to the financial system in much the same way certain derivatives brought it near collapse more than a decade ago. Notorious credit default swaps were engineered by math wizards in much the same way crypto has emerged, he said.

“Crypto/DeFi today is on a path that looks similar to CDS in the early 2000’s,” Hsu told the Blockchain Association in a webcast. “Fortunately, this group has the power to change paths and avoid a crisis.”

OCC had previously been run by a former Coinbase Global Inc. executive, Brian P. Brooks, who led a pro-crypto charge to establish policies more welcoming to the industry and to provide some of the firms banking charters. When he was installed at the OCC by Treasury Secretary Janet Yellen, Hsu put its crypto-friendly policies on hold and has been among regulators calling for a new, unified approach across agencies.