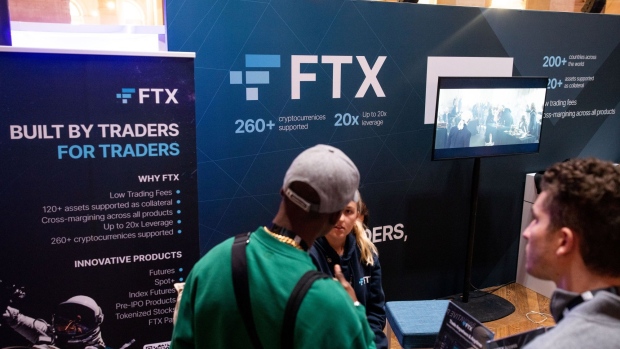 The FTX booth at the Blockchain Week Summit in Paris, France, on Wednesday, April 13, 2022. The three-day conference brings together the brightest minds, business professionals and leading investors to help you navigate the blockchain industry, according to the event's organisers. Photographer: Benjamin Girette/Bloomberg , Bloomberg

The agreement is valued at about $1.4 billion, comprising an “additional consideration” worth about $111 million and the $1.3 billion market value of all the cryptocurrency at the bankrupt platform, according to a statement from Voyager Digital on Monday in New York.

Customers will be able to transfer to the FTX US platform after the conclusion of the bankruptcy process, Voyager said, adding the purchase agreement will be presented for approval in court on Oct. 19.

The purchase follows several earlier attempts by FTX to bail out or acquire Voyager. The New York-based platform had about 3.5 million users at the end of March, and 1.19 million funded accounts.

Voyager filed for bankruptcy protection in July after a failed attempt by Alameda Research -- a trading house affiliated with FTX -- to bail it out with a revolving line of credit.

That same month, FTX and Alameda disclosed a joint bid for Voyager, but Voyager called it a “low-ball” offer. In September, Alameda said it will return about $200 million worth of Bitcoin and Ether it had borrowed from Voyager by the end of the month.

Bankman-Fried has been aggressively buying up distressed crypto companies this year, scooping up millions of customers and valuable technologies at a cheaper price than they traded at just half a year ago.

Earlier this year FTX propped up the crypto platform BlockFi and was exploring a potential takeover of Robinhood Markets Inc., where Bankman-Fried owns a stake. He is estimated to own more than 50% of FTX, 70% of FTX US, and almost all of Alameda.

FTX is in the process of raising a $1 billion funding round, according to a source familiar with the deal, which hasn’t closed yet or been made public.

(Updates from the first paragraph with Voyager statement.)