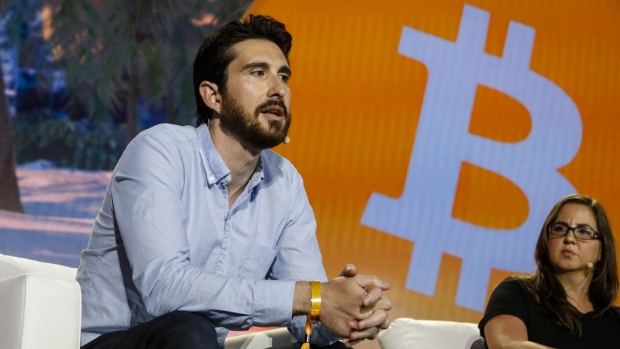 Marco Santori, chief legal officer of Kraken LLC, left, speaks during the Bitcoin 2021 conference in Miami, Florida, U.S., on Friday, June 4, 2021. The biggest Bitcoin event in the world brings a sold-out crowd of 12,000 attendees and thousands more to Miami for a two-day conference. , Bloomberg

(Bloomberg) -- Wall Street-esque regulation is coming to the cryptocurrency industry, so it pays to play nice. That’s the message from Marco Santori, chief legal officer of the Kraken Digital Asset Exchange.

While Coinbase head Brian Armstrong -- and Santori’s boss, Kraken founder and chief executive Jesse Powell -- have taken an adversarial tone toward agencies such as the U.S. Securities and Exchange Commission, it’s clear that more stringent regulation is in the offing, Santori said.

“You’re just living in a fantasy world if you don’t believe that this industry is going to face heavier, more Wall Street-like regulation from governments in the U.S. and abroad, and Kraken has simply been practical about that future,” Santori said on Bloomberg’s “QuickTake Stock” broadcast Thursday.

Scrutiny of the crypto industry at large has increased in recent months, as officials fret over everything from stablecoins to decentralized exchanges to lending products. Crypto firms are bracing for battle as state regulators and the SEC alike warn of more enforcement actions to come.

Coinbase CEO Armstrong unleashed a barrage of critical tweets this month after the SEC sent a notice to the exchange that it could be sued if it went ahead with its crypto lending project, accusing the agency of “sketchy” behavior. While Armstrong may have been voicing frustrations felt by many, Santori said he “can’t support” such an approach. Coinbase ended up killing the lending program.

“I’ve certainly followed Brian’s tweets, and I’ll say that look, you’re just not being honest with yourself about the crypto community if a little bit of you doesn’t think he’s saying what a lot of people are thinking,” Santori said. “I can’t support that kind of approach with regulators. It’s never been successful historically and from our experience, we’ve found the SEC to be open to discussion.”