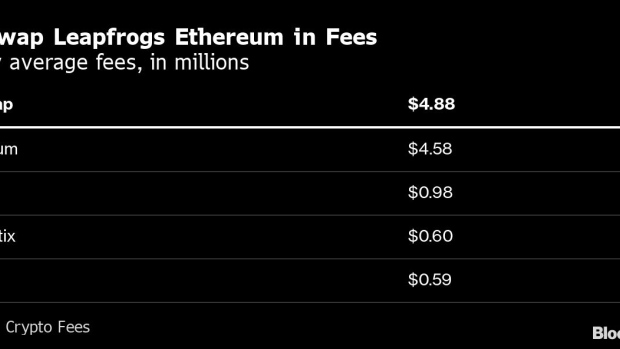 (Bloomberg) -- In a surprise twist, Uniswap -- the world’s biggest decentralized crypto exchange -- is now generating more in user fees than Ethereum, the blockchain where it got its start.

Over the last seven days, Uniswap’s average total user fees have grown to about $4.1 million, surpassing Ethereum’s $3.9 million, according to data tracker Crypto Fees. Ethereum has usually been the bigger money-maker, hosting thousands of projects -- including Uniswap -- that pay so-called gas fees to conduct transactions on its blockchain. To put this in perspective, on Jan. 1, Ethereum earned nearly 10 times more fees than Uniswap, data from Crypto Fees shows.

“When combined with heightened volatility over the last few weeks, Uniswap volumes and therefore fees have increased heavily as trading has picked up everywhere,” said Katie Talati, director of research at Arca, a crypto and blockchain-focused asset manager. The firm does not disclose whether it owns Uniswap’s Uni token.

The uptick in trading comes in the midst of a crypto bear market, where coin prices have been swinging wildly in recent weeks. Ether plunged 66% and Bitcoin dropped about 50% between June 7-18, following a solvency crisis at crypto lender Celsius Network and liquidity troubles at hedge fund Three Arrows Capital, plus the related fallout for other crypto funds and apps.

“Meanwhile, usage on Ethereum has dropped massively,” said Talati, noting that many applications and users are migrating to so-called Layer 2 blockchains, which are built to ease congestion on Ethereum and also have lower transaction fees. During the sale of Otherside nonfungible tokens on May 1, users wound up paying more for Ethereum gas fees than for actual NFTs.

Layer 2 chains like Polygon and Arbitrum -- which already host Uniswap and a growing number of apps -- can provide some relief for users frustrated with Ethereum’s price spikes during high demand periods.

Since hitting a peak last year, the number of transactions on Ethereum has been trending downward, according to analytics platform Etherscan. This is partially due to traders moving away from financial apps hosted on the network amid the broader crypto rout.

“I wouldn’t be surprised to continue to see this dynamic play out, especially as more Ethereum usage moves to Layer 2,” said Henry Elder, head of decentralized finance at Wave Financial, an investment and asset management firm focused on digital assets and blockchain technology. “I think the dynamic flips back to high Ethereum revenues once we move back into a bull market, though.”

In the case of Uniswap, fees usually go to liquidity providers, or users who provide tokens in various trading pools, whereas Ethereum fees go to miners whose computers help order transactions on the chain.

But this clear distinction is likely to blur later this year, when Ethereum is upgraded to a proof-of-stake protocol that gets rid of miners altogether and orders transactions via coins that users deposit in locked wallets. Until Ethereum undergoes yet another software upgrade, possibly next year, depositors cannot take their locked Ether out. This means that in the meantime, becoming a liquidity provider on Uniswap may be more appealing for some risk-takers than becoming a staker on Ethereum.