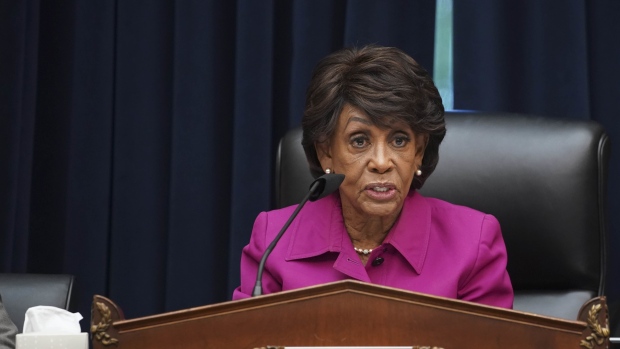 Representative Maxine Waters, a Democrat from California and chairwoman of the House Financial Services Committee, speaks during a hearing in Washington, D.C., U.S., on Thursday, Sept. 30, 2021. The Treasury secretary this week warned in a letter to congressional leaders that her department will effectively run out of cash around Oct. 18 unless Congress suspends or increases the debt limit. , Bloomberg

(Bloomberg) -- Some of the biggest names in crypto will head to Capitol Hill next week as lawmakers weigh new rules for the white-hot asset class.

Sam Bankman-Fried, chief executive officer of the FTX derivatives exchange, and Brian Brooks, who now runs crypto miner Bitfury Group Ltd. after serving as the Trump administration’s acting comptroller of the currency, will be among the executives set to testify Dec. 8 before the House Financial Services Committee. The hearing will on the “challenges of financial innovation” in the U.S., the committee said in a statement on Wednesday.

How to police the almost $3 trillion cryptocurrency market is becoming an increasingly political issue in Washington, with Democrats including Senator Elizabeth Warren calling for a harsh crackdown and Republicans including Patrick McHenry, the highest-ranking member of the GOP on the House panel, demanding a hands-off approach. Meanwhile, federal regulators including the Securities and Exchange Commission, the Federal Reserve and the Commodity Futures Trading Commission are jostling over turf.

The statement announcing next week’s hearing emphasized Chair Maxine Waters efforts to ensure “accountability of large financial institutions and emerging tech products and services.” Libra, which was backed by the company formerly known as Facebook, ran into stiff opposition -- and ultimately stalled -- after a hearing before the same committee in 2019.

Other executives to testify include: