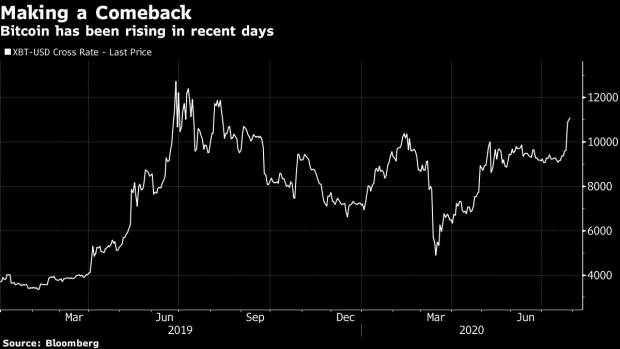 A person rides a bicycle past the Nasdaq MarketSite in the Times Square neighborhood of New York, U.S., on Monday, July 20, 2020. U.S. stocks fluctuated in light trading as investors are keeping an eye on Washington, where lawmakers will begin hammering out a rescue package to replace some of the expiring benefits earlier versions contained. Photographer: Michael Nagle/Bloomberg , Bloomberg

(Bloomberg) -- Diginex Ltd. is on track to go public in September on Nasdaq after the Hong Kong-based cryptocurrency and blockchain-services firm first announced the move via a reverse merger more than a year ago.

The deal with 8i Enterprises Acquisition Corp., a special purpose investment holding company, had been delayed from June but has now secured listing approval from the U.S. Securities and Exchange Commission and will be voted on by shareholders on Sept. 15, said Richard Byworth, Diginex’s CEO.

Trading on a major U.S. market would be a coup for firm in a field of almost entirely private start-ups competing with each other across the globe with scant regulation. The current listing for 8i will become Diginex between Sept. 20-23 and the ticker, JFK, will be subsequently changed, Byworth said.

“The tone for the U.S. and those important stock markets means we’re going to start to see more and more of this industry come to market,” Byworth said in an interview from Hong Kong. “That’s a really important step because it elevates that level of trust and credibility.”

The original listing date for Diginex in March was delayed due to the market downturn from the pandemic, he said. The firm hired former UBS Group AG executive Chi-Won Yoon as its chairman of Asia in April.

Diginex’s pending listing comes with the cryptocurrency industry on a bit of an upswing after Bitcoin topped $11,000 for the first time this year. The firm has also announced the public launch of its Equos.io exchange today, initially offering crypto spot trading and their first derivatives product coming in mid-August, Byworth said.

The plan to go public “speaks to the credibility of the team and the pedigree within traditional financial markets,” he opined.