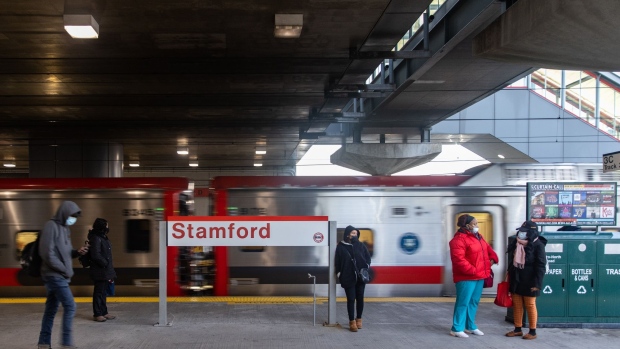 Commuters on the platform of a Metro-North station in Stamford, Connecticut, U.S., on Thursday, Nov. 18, 2021. Metro-North's daily ridership numbers may still be way down from pre-pandemic levels, but some trains are filling up enough to make it feel like old times again. Photographer: Jeenah Moon/Bloomberg , Bloomberg

DCG is expected to create more than 300 new jobs in the state over the next five years, according to a statement from the office of Connecticut Governor Ned Lamont. The Connecticut Department of Economic and Community Development is backing the transition with a grant in arrears of up to $5.01 million.

“It quickly became clear that Connecticut had everything we were looking for in a new headquarters,” DCG Chief Executive Officer Barry Silbert said in the statement. “Its proximity to major metropolitan areas combined with its infrastructure, talent, business-friendly environment, and world-class facilities to house our rapidly-growing organization made it an easy choice. We are committed to making our new home in Stamford a hub for the next generation of fintech and blockchain entrepreneurs.”

Related: Crypto Jobs Span U.S. as Hubs Spring Up From Miami to Denver

DCG is a major player in the crypto space, with a recent $700 million secondary equity transaction led by SoftBank Group Corp. valuing it at $10 billion. Winning a firm of that size and prominence in the crypto space represents a coup for Stamford and Connecticut more broadly as different locales vie to become the de facto hub for crypto and blockchain companies in the U.S.

Miami has emerged as a front-runner for that title, and even has its own digital token -- though it has competitors. Incoming New York City Mayor Eric Adams said in a tweet earlier this month that the city would become “the center of the cryptocurrency industry.”