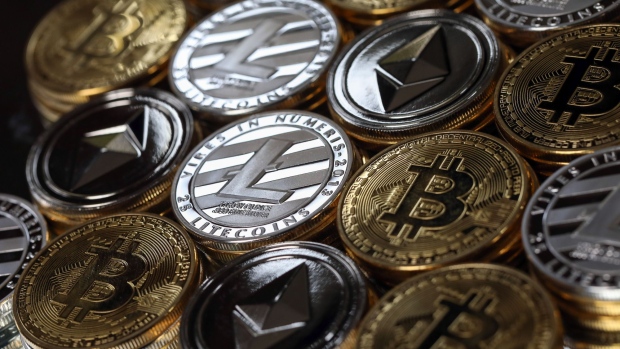 A collection of bitcoin, litecoin and ethereum tokens sit in this arranged photograph in Danbury, U.K. , Bloomberg

(Bloomberg) -- The 29-year-old founder of a defunct Florida cryptocurrency firm will spend eight years behind bars for duping investors out of more than $36 million with the help of celebrities including boxer Floyd Mayweather and music producer DJ Khaled, who he paid to promote the business.

Sohrab “Sam” Sharma was sentenced to the term in federal prison by U.S. District Judge Lorna G. Schofield on Thursday. He pleaded guilty in July to conspiring to commit securities fraud, wire fraud and mail fraud as part of an initial coin offering scheme, which included the bogus claim that his company, Centra Tech, was led by a Harvard-educated chief executive officer with decades of business experience.

At times holding back tears at the video conference hearing, Sharma apologized to his family, his friends, his employees and his investors, saying he had an idea he thought was “groundbreaking” but was dishonest and tried to make the company seem more successful than it was.

“I am deeply sorry and devastated for what my actions have done to those who believed in me and my vision,” Sharma said. “It truly breaks my heart.” He said, “I wanted to fake it till I made it, and I was hoping that the ends justified the means.”

Victims of the fraud, including the professor whose picture was used as that of the firm’s supposed CEO, addressed the court before the judge handed down the sentence. One investor told the court that Centra Tech gutted the retirement savings of her and her husband, who have six small children, and that they may never be able to recover.

“Centra Tech stole from hardworking American families whose only desire is to provide for our children,” she said. “Our family suffered a great deal of emotional and psychological damage over this.” Addressing Sharma, she said, “This was utter victimization, and you really should be ashamed of yourself.”

Sharma created Centra Tech out of his small Miami apartment in 2017, just as virtual currencies such as Bitcoin were attracting more widespread attention from investors. His idea was to provide customers with access to cryptocurrency purchases on credit card networks and an eBay-like exchange using tokens issued by Centra Tech to buy merchandise online, court records show.

Centra Tech was among a surge in businesses that created their own digital tokens and started selling them to raise money instead of equity. The same month Sharma started his company, the U.S. Securities and Exchange Commission warned that coin offerings were being used to “improperly entice investors with the promise of high returns.”

Sharma recruited Robert Farkas and Raymond Trapani to join him at Centra Tech, court records show. Farkas, the brother of Sharma’s girlfriend, and Trapani had worked with him at a Miami luxury car rental company they started named Miami Exotics.

The trio quickly raised funds with the help of social media mentions by celebrities including Mayweather and DJ Khaled, who later settled SEC charges that they failed to disclose they had been paid to promote the company. In his pitch to investors, Sharma said Centra Tech was run by a Harvard-trained CEO who had licenses in more than three dozens states and partnerships with large companies including credit-card issuers Mastercard Inc. and Visa Inc.

Within three months, they’d raised more than $25 million for their initial coin offering and moved to luxury offices in Miami Beach.

But by August 2017, a blogger revealed that a photograph of the purported Centra Tech CEO shown on a white paper circulated to investors was actually that of a Canadian physiology professor by a different name. The SEC sent a subpoena in November seeking documents from Centra Tech. Five months later, the three co-founders were arrested and charged by federal prosecutors in New York.

‘Not an Evil Person’

As part of his plea, Sharma agreed to forfeit 100,000 units of the cryptocurrency Ether that had been raised from victims who bought digital tokens issued by his firm. The government later sold the units for about $33.4 million.

Federal sentencing guidelines called for Sharma to spend 14 to 15 years behind bars, and probation officers recommended that he serve a decade in prison.

His attorneys sought 30 months, saying Sharma didn’t set out to lie or mislead people. In a sentencing memo to the judge, they argued Centra Tech “essentially blew up overnight,” forcing Sharma to “scramble to manage a company that could deliver” on the volume of contributions it was receiving. “While he is flawed, he is not an evil person, nor a hardened criminal,” his attorneys said.

Prosecutors said a lengthy prison term, within the guidelines’ full 14- to 15-year range, was needed to punish a “predatory fraudster” and to stop others from committing similar crimes.“Actions speak louder than words,” Assistant U.S. Attorney Ilan Graff said in a memo before sentencing. “He is a recidivist con-artist who, in this case, used a web of lies to prey on unwitting investors’ enthusiasm for burgeoning developments in the financial technology industry.”