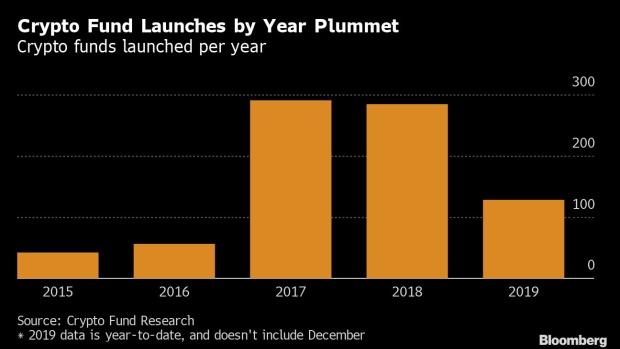 Illuminated mining rigs operate mounted inside racks at the BitRiver Rus LLC cryptocurrency mining farm in Bratsk, Russia, on Friday, Nov. 8, 2019. Bitriver, the largest data center in the former Soviet Union, was opened just a year ago, but has already won clients from all over the world, including the U.S., Japan and China. Most of them mine bitcoins. Photographer: Andrey Rudakov/Bloomberg , Bloomberg

(Bloomberg) -- “Just wait until institutional investors jump in” has long been a rallying call for the cryptocurrency faithful.

It appears they’ll need to keep waiting a little longer, with nearly 70 crypto-focused hedge funds that mostly cater to pensions, family offices and wealthy individuals closing this year, according to San Francisco-based Crypto Fund Research. The number of new fund launched is less than half the amount started in 2018, the researcher said.

The retrenchment comes amid another volatile year for cryptocurrencies, with Bitcoin and its peers once again posting the kind of swings that make institutional investors uncomfortable. While high-profile advocates such as Fidelity Investments and the New York Stock Exchange’s parent company plow ahead with initiatives seeking to make it easier to own digital assets, their potential customer base seems to be disappearing at a quick clip.

“The market is definitely retail driven and will remain so for the foreseeable future,” said Nic Carter, co-founder of Boston-based crypto market tracker Coin Metrics.

At the same time, one of the other projected lures for professional money managers -- regulated futures -- continue to be greeted with a muted response.

Trading volumes on Bitcoin futures on exchanges like Chicago Mercantile Exchange and Bakkt, which began offering futures that settled in Bitcoin in September, have increased, but are still relatively low. CME’s daily volume this year averaged about 32,500 Bitcoins, or $236.8 million at current prices, with more than 3,500 individual accounts trading, the company said in November.

That’s just a drop in the bucket compared with the volume on less-regulated trading platforms outside the U.S. Aggregate Bitcoin futures volume -- mostly on exchanges letting any retail speculator buy contracts with as much as 125 times more money than they put down -- exceeds $10 billion a day, according to tracker Skew.com.

That hasn’t stopped Fidelity from joining long-time crypto advocates such as Michael Novogratz and the Winklevoss brothers from building out services such as custodial storage to make institutional investors more comfortable owning digital assets. Fidelity said recently that growth is exceeding internal expectations without providing specifics.

“It’s not a stampede by any stretch, but people are all doing their work,” Novogratz, chief executive officer of Galaxy Investment Partners LLC, said in a recent interview. “The next wave will come from the wealth advisers, maybe with endowments and small foundations participating.” In November, Galaxy launched two new Bitcoin funds for institutional investors, such as high net worth individuals.

Two pension funds of Fairfax Retirement System recently increased their exposure to the industry. Earlier this year, Harvard University’s endowment backed Blockstack Inc., a crypto company. Institutions’ investments into cryptocurrencies are likely to increase over the next five years, according to a Fidelity survey earlier this year

Regulatory scrutiny is to blame in large part for the hesitant steps, as governments try to stop rampant scams and companies like Facebook Inc. from usurping too much power. The resulting uncertainty, as well as cryptocurrencies’ inherent volatility (Bitcoin has nearly doubled since the beginning of the year, but is down by more than 40% since its peak in June) are likely to continue to give many investors pause.

“Taking a step back, I think some would argue that the levels of institutional adoption are disappointing or underwhelming but, of course, this view depends entirely on expectations,” said Spencer Bogart, general partner at San Francisco-based Blockchain Capital LLC. “To me, the fact that there is any institutional adoption for Bitcoin only 10 years into existence is a radical success and beyond what anyone could have imagined just 3 or 4 years ago.”