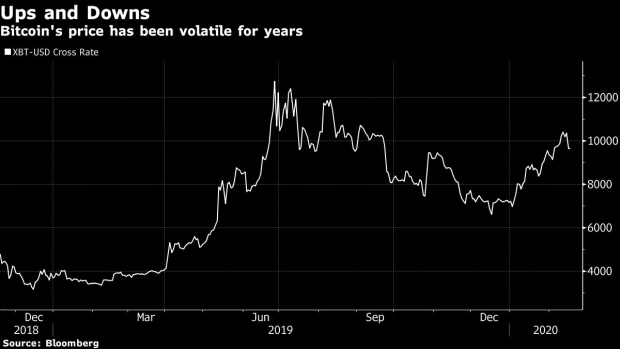 (Bloomberg) -- Binance Holdings Ltd., one of the world’s largest cryptocurrency-trading platforms, has made its first foray into business services by lending its technology and liquidity to those who want to start their own exchanges.

Tech giants like Amazon.com Inc. and Alphabet Inc. have over the years evolved beyond their core consumer-facing services and become some of the world’s biggest cloud providers -- and Binance envisions the same type of success in crypto. Binance Cloud will overtake the company’s main exchange to become its biggest source of revenue in five years, co-founder and CEO “CZ” Zhao Changpeng estimates.

“Theoretically speaking, we can let anyone in the world create their own exchanges, and the demand is huge,” the 43-year-old coder-turned-entrepreneur said in an interview. “Even during the crypto winter of 2018 and 2019, hundreds of new exchanges popped up every day.”

The cloud division -- which started just three months ago and now has nearly 20 people -- complements Binance’s strategy of attracting fiat money. Like its peers, Binance makes money mostly via transaction fees on its trading platforms, which fluctuate wildly with crypto prices. The shift into enterprise-oriented businesses could also help the startup unlock a more steady revenue stream.

Binance started off in 2017 as a crypto-to-crypto trading platform, and gained momentum quickly by handling only tokens like Bitcoin and Ether, which allowed it to avoid dealing with banks and government watchdogs. Now a major player, Zhao’s firm is working to shake off its reputation as a regulatory arbitrageur: It has set up regulatory-compliant fiat exchanges in jurisdictions like Singapore and Jersey as it seeks to appeal to a much larger user base that hasn’t bought digital money yet.

And this isn’t Zhao’s first crack at the cloud business. Before Binance, he was the founder of a Shanghai-based startup called BijieTech specializing in outsourcing tech solutions for crypto exchange operators.

Zhao said Binance would favor fiat exchanges as its cloud clients, especially those that target regions or communities where the company doesn’t yet have a strong foothold. Ideally they would also have “good compliance status, relationships, and even strong influence with regulators,” he said.

Competition is still nascent in cloud services for crypto exchanges. Binance rival Huobi rolled out its cloud operation in 2018 and has signed up partners including Russia’s VEB Bank and Taiwan’s Chi Fu Group, according to its website.

Binance will announce the first fiat exchange powered by its cloud service in the coming weeks, while it has confirmed four other clients in the lineup, Zhao said, without sharing specifics.

Aside from tapping into Binance tech, Zhao said clients will also be able to access the order books of all the existing trading pairs on Binance.

“Liquidity is a chicken-and-egg problem for small exchanges,” he said. “Without liquidity, they won’t have users.”

To contact the editors responsible for this story: Edwin Chan at echan273@bloomberg.net, Joanna Ossinger, David Scanlan