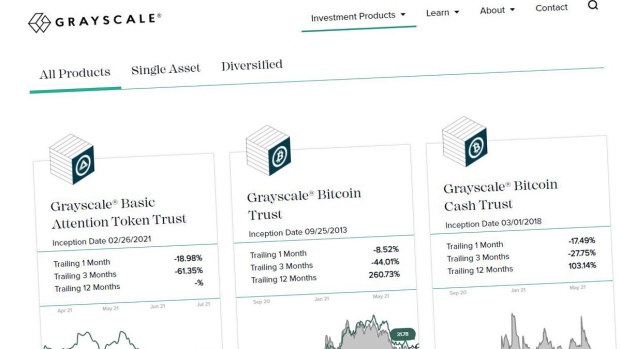 Grayscale Investments LLC’s Future of Finance ETF (ticker GFOF), which begins trading on Wednesday, is designed to track companies that are “actively building and advancing the digital economy,” said to David LaValle, the firm’s global head of ETFs. That vision includes companies such as Silvergate Capital Corp., Coinbase Global Inc and PayPal Inc.

The fund is Grayscale’s first step in an effort to transform into a “world-class ETF issuer,” said LaValle, who was hired in August to lead that effort. In October, the asset manager filed to convert the $24 billion Grayscale Bitcoin Trust (GBTC) -- the world’s largest Bitcoin fund -- into an ETF, a structure which U.S. regulators have repeatedly rejected. In the meantime, Grayscale is working to meet investor demand for exposure to elements of the crypto industry, according to LaValle.

“While GBTC conversion is certainly a goal, it’s not the goal,” LaValle said in a phone interview. “I joined with the express goal of creating a world-class ETF issuer, and GFOF is the first iteration of that.”

Several funds have launched to track crypto-linked equities, such as the $956 million Amplify Transformational Data Sharing ETF (BLOK) and the $221 million Siren Nasdaq NexGen Economy ETF (BLCN). Both have suffered in recent months with Bitcoin’s 44% swoon from November’s all-time high.

However, unlike other ETFs holding crypto-linked equities, the mission behind GFOF is to identify the companies that will play a defining role in shaping the intersection of finance and digital assets, LaValle said. That means the ETF won’t hold companies with Bitcoin on the balance sheet, payment processors or semiconductor chipmakers, which are popular among other crypto-themed funds.

GFOF will be passively managed and charge a fee of 0.7%.