It's game over for crypto once central banks get into digital coins: Professor Ian Lee

Felix Dian is in fighting spirits after this week’s crypto meltdown.

Like many pros, the former Morgan Stanley trader says Bitcoin’s volatility actually shows why hedge funds are in the digital-currency game: To ride boom and bust cycles with diversified bets so clients don’t get killed at times like this.

Something is working. His US$80 million crypto-focused fund at MVPQ Capital is up 14 per cent in May and has more than tripled in value this year. In contrast, Bitcoin has plunged almost 30 per cent this month, cutting the advance for 2021 to 42 per cent.

“We had kept dry powder,” he said in an interview from London. He took advantage of Wednesday’s price collapse and bought Bitcoin when it was trading around US$35,000. 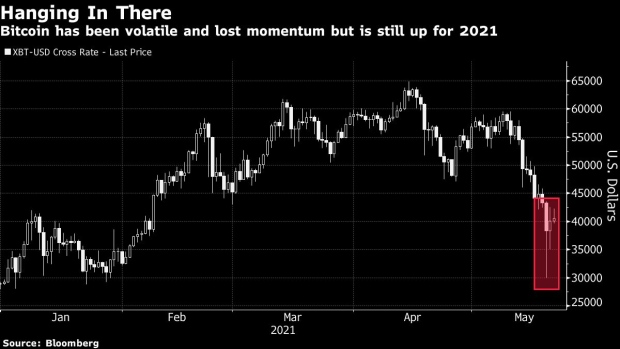 Not everyone’s been so lucky. Scores have seen their fortunes dashed this week in a cascade of selling across crypto markets. Investors spent some US$410 billion buying up Bitcoin during this bull market, according to data from Chainalysis. When prices sank to US$36,000 this week, US$300 billion of those positions were at a loss.

It’s left money managers wrestling with whether the digital currency, which is coming under new regulatory scrutiny in the U.S. and China, still has the makings of a serious asset class or will remain nothing more than a speculative bubble.

Charles Erith, who worked for 24 years in Asian emerging markets before jumping to crypto, said the speculative froth was flushed out this week. He bought Bitcoin as prices were plunging.

“At US$35,000, we felt it’s a reasonable level at which to be adding,” said Erith, who runs ByteTree Asset Management in London. “It’s obviously not regulated and it’s a very young asset, but I don’t think this is going to be a revisit of 2018.”

Data from research firm Chainalysis shows professional investors used the crash as an opportunity to start buying at cheap levels, helping put a floor under the market. Big investors bought 34,000 Bitcoin on Tuesday and Wednesday after reducing holdings by as much as 51,000 bitcoin in the last two weeks, according to data from Chainalysis.

“People that were borrowing money to invest, they were wiped from the system,” said Kyle Davies, co-founder at Three Arrows Capital in Singapore. His firm bought more Bitcoin and Ether as prices of the tokens tumbled this week.

“Every time we see massive liquidation is a chance to buy,” he added. “I wouldn’t be surprised if Bitcoin and Ethereum retrace the entire drop in a week.”

Over in Paris, Loan Venkatapen, founder of Blocklabs Capital Management, blames the recent rout on over-leveraged retail investors but says blockchain and the related technologies “are here to stay.”

Unlike Davies, Venkatapen avoided Bitcoin, but bought Ether, Solana and other assets connected with the decentralized finance movement as they sold off.

“Bitcoin is not dying, but we expect productive blockchain assets such as Ethereum or Solana to challenge Bitcoin dominance in the coming months,” he said.