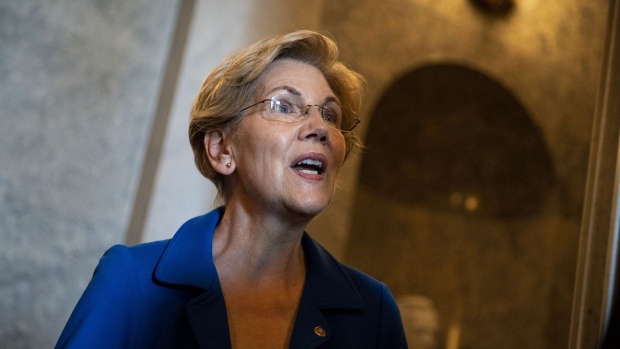 Senator Elizabeth Warren, a Democrat from Massachusetts, speaks to members of the media following a vote in the U.S. Capitol in Washington, D.C., U.S., on Tuesday, June 8, 2021. Democratic congressional leaders face a narrowing path to move forward on President Joe Biden's $4 trillion economic agenda without Republican support as negotiations with the GOP are at risk of stalling. Photographer: Al Drago/Bloomberg , Bloomberg

(Bloomberg) -- The U.S. government needs to step up oversight of the digital currency market and find ways to protect consumers from scams stemming from the rapid rise of cryptocurrencies, Massachusetts Democratic Senator Elizabeth Warren said Wednesday.

Warren, in a Bloomberg TV interview, called the market for cryptocurrencies the “wild West,” and said digital currency is “not a good way to buy and sell things and not a good investment and an environmental disaster.”

Earlier in the day, Warren chaired a Senate Banking subcommittee hearing that explored issues with existing cryptocurrencies as well as whether the U.S. Federal Reserve should issue its own, known as a central bank digital currency. Some of the witnesses suggested that world governments should crack down on Bitcoin and other cryptocurrencies and potentially even prohibit them from being converted back into U.S. dollars. Warren also said during the hearing that the amount of energy needed to power the Bitcoin network threatens the environment.

Warren, in the Bloomberg interview, didn’t suggest specific new regulations that she would like to see from Congress or regulators, but said that certain protections that exist in other parts of the financial system, for example for credit-card fraud, aren’t present for cryptocurrencies. She said that securities and banking regulators should look at what they can do to improve the framework for consumers and said that her committee plans to hold additional crypto-related hearings.