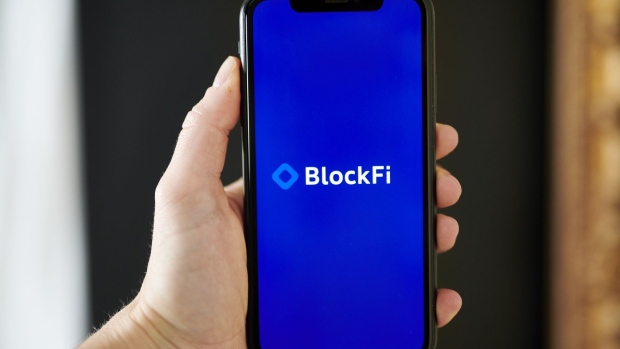 The BlockFi website on a laptop computer arranged in Little Falls, New Jersey, U.S., on Saturday, May 22, 2021. Elon Musk continued to toy with the price of Bitcoin Monday, taking to Twitter to indicate support for what he says is an effort by miners to make their operations greener. , Bloomberg

(Bloomberg) -- BlockFi Inc. is poised to pay $100 million to settle allegations from the Securities and Exchange Commission and state regulators that it illegally offered a product that pays customers high interest rates to lend out their digital tokens, according to people familiar with the matter.

The penalties, which could be announced as soon as next week, are among the toughest levied on a cryptocurrency firm amid a U.S. clampdown on the industry. The SEC and state investigators have been probing whether the accounts offered by BlockFi are akin to securities that should be registered with regulators.

Scrutiny has been mounting on crypto-lenders, which have attracted tens of billions of dollars in deposits by promising yields that far exceed those available through traditional savings accounts. As part of its agreement with regulators, BlockFi will no longer be able to open new interest-yielding accounts for most Americans, the people said.

“We have been in productive ongoing dialogue with regulators at the federal and state level. We do not comment on market rumors,” said BlockFi spokesperson Madelyn McHugh. “We can confirm that clients’ assets are safeguarded on the BlockFi platform and BlockFi Interest Account clients will continue to earn crypto interest as they always have.”

SEC Chair Gary Gensler has been sounding the alarm on fast-growing crypto firms, arguing that some are offering financial services without adhering to benchmark investor-protection rules that banks, brokers and other long-established entities have long had to comply with.

BlockFi, based in Jersey City, New Jersey, will pay a $50 million fine to the SEC and another $50 million to various states, said the people who asked not to be named because the deliberations are private. It’s among several companies, including Celsius Network and Gemini Trust Co., that have become wildly popular with retail investors for paying yields that sometimes exceed 10%.

Securities regulators from several states last year brought enforcement actions against BlockFi and Celsius over the accounts, arguing that the companies were selling unregistered securities with undisclosed risks. The SEC is also scrutinizing Celsius, Gemini and Voyager Digital Ltd. over similar issues, Bloomberg reported in January.

At the time, a Gemini spokeswoman said the company was cooperating with an “industry-wide inquiry” into crypto-yield products. Celsius said it was working with regulators to “operate in full compliance with the law” and a Voyager spokesman said it was routine to be in ongoing communications with watchdogs. The SEC hasn’t accused any of the companies of wrongdoing.

The SEC has separately warned Coinbase Global Inc., the biggest U.S. crypto exchange, that it would sue if the company moved forward with a lending product, prompting the company to suspend the project in September.

Executives at BlockFi have said they are able to pay such high yields to customers because institutional investors will pay them even more to borrow the deposits. But the companies don’t provide a detailed accounting of how the funds are used or in what circumstances investors could lose their cryptocurrency. Unlike bank accounts, the crypto-interest accounts aren’t federally insured.

Earlier this year, BlockFi said its Bermuda-based subsidiary would handle foreign clients. It also introduced a non-interest-paying crypto wallet and a new-interest product for accounts with at least $3 million in cryptocurrencies.