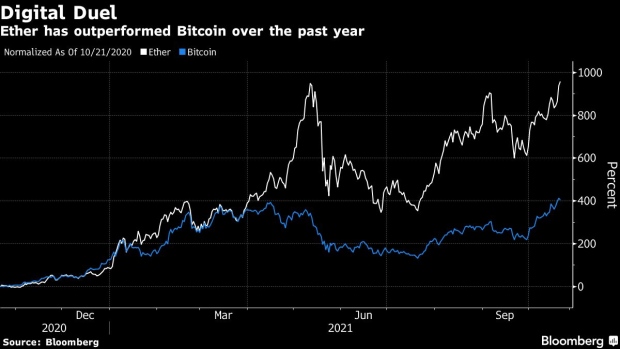 (Bloomberg) -- Optimism about digital assets stoked by Bitcoin’s run to a record high has helped push the overall value of cryptocurrencies to an all-time peak of more than $2.7 trillion.

That’s a climb of about $200 billion from the last high in May for a sector that now spans almost 10,000 coins, according to data from tracker CoinGecko.

The ascent shows how bets on cryptos are spreading beyond Bitcoin amid enthusiasm about more mainstream adoption of digital assets following the launch of the first Bitcoin-linked exchanged-traded fund in the U.S.

Ether -- the largest token after Bitcoin -- rose as much as 3.3% on Thursday to within striking distance of its highest value of almost $4,400 achieved in May.

Analysis of chart patterns suggests Ether, along with Solana, Polkadot, Tezos and Binance Coin, are all “close to their own breakouts,” strategists at Fundstrat said in a report Wednesday.

Bitcoin hit a peak of almost $67,000 on Wednesday before dipping below $65,000 as of 7:15 a.m. in London on Thursday. The question now is whether the famously volatile asset will push on or succumb to a bout of selling as speculators take profits.

A reversal would likely also dent sentiment in the crypto market as a whole, which suffered a rout mid-year that depressed its value to some $1.3 trillion.

For now bullish sentiment is ascendant. Pankaj Balani, the chief executive officer of crypto-derivatives exchange Delta Exchange, said he expects Bitcoin to outperform other tokens and predicted the largest cryptocurrency will breach $100,000 before year-end.