What’s driving the surge in Bitcoin and will it last

Bitcoin’s wild price swings resumed after the the world’s largest cryptocurrency climbed above US$40,000 for the first time.

After jumping as much as 11 per cent to US$40,394, Bitcoin fell around US$3,500 in about half an hour and continues to fluctuate. Prices vacillated as much as 17 per cent on Monday. The digital token has more than doubled in less than a month.

Strategists have cited demand from speculative retail traders, trend-following quant funds, the rich and even institutional investors as among the reasons for the surge. The total market value of cryptocurrencies climbed beyond US$1 trillion for the first time Thursday.

“Bitcoin continues to defy all expectations, and doubters,” said Antoni Trenchev, co-founder and managing partner of Nexo, a crypto lender. “It’s leaving all other assets trailing in its wake, like it’s done year in, year out for the past decade.”

Bitcoin accounts for about two-thirds of cryptocurrency market value, followed by Ether at about 13 per cent, according to CoinGecko data.

Coinbase Inc., the largest U.S. digital exchange, said it’s experiencing “connectivity issues” on both the website and mobile app for a second day. 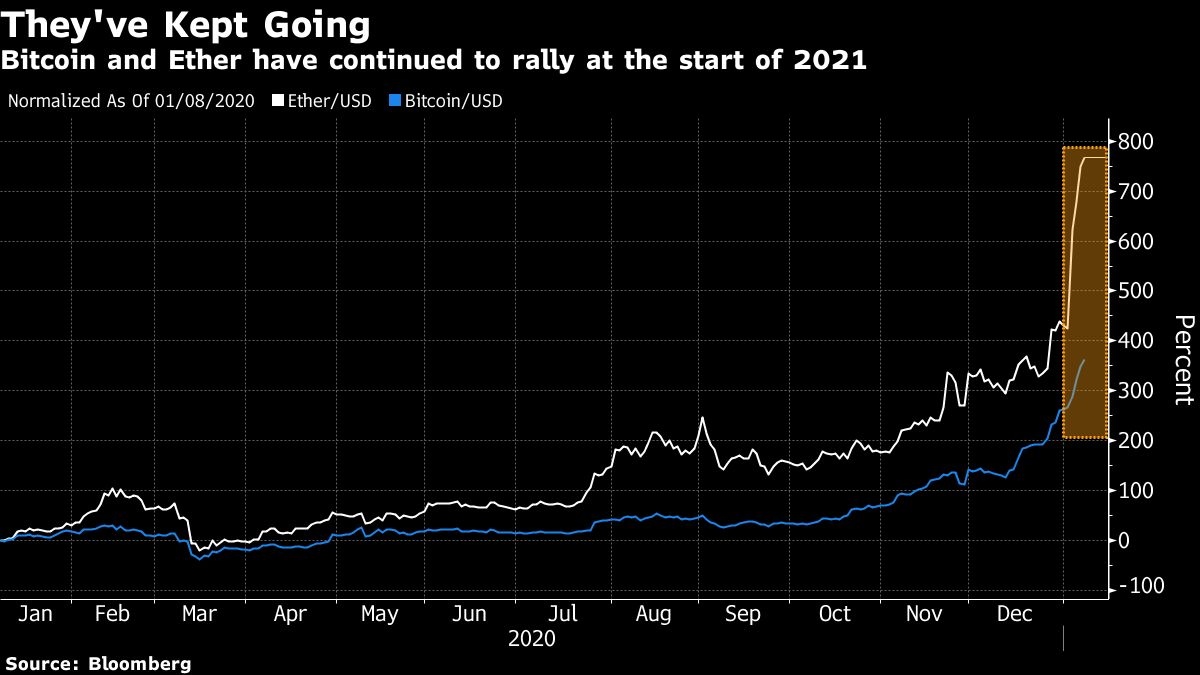 Digital coins are jumping in a world awash with fiscal and monetary stimulus, even as some commentators fear an inevitable bust and others question the basic integrity of crypto markets. Proponents of Bitcoin argue it offers a hedge against dollar weakness and the risk of faster inflation, a bit like gold, while critics decry the intellectual soundness of comparing the two assets.

“The more that people perceive that their assets, particularly their liquid assets such as fiat currencies are eroding in value, the more they will look for alternatives,” said Geoffrey Morphy, president of Canadian crypto mining company Bitfarms Ltd.

Active Bitcoin accounts are nearing their all-time high levels of late 2017, according to researcher Flipside Crypto -- possibly a sign that some holders are planning to sell. Fewer than 2 per cent of accounts hold 95 per cent of Bitcoin supply, so a few big trades can impact prices. The last big Bitcoin boom began imploding in late 2017.

Some traders pointed to JPMorgan Chase & Co.’s long-term Bitcoin price forecast of US$146,000 as possibly fueling the rally. Others said sentiment was boosted by a U.S. regulatory update that allows a class of less volatile coins to be used by banks for payments.

“This parabolic move upwards, with normally staid Wall Street firms including JP Morgan calling US$146,000 as their price target for Bitcoin, and Guggenheim called US$400,000, feels like it has a long way to go before exhausting,” said Guy Hirsch, managing director for U.S. at eToro. “It wouldn’t be all that surprising to see US$100,000 at some point this year, given the current momentum.”