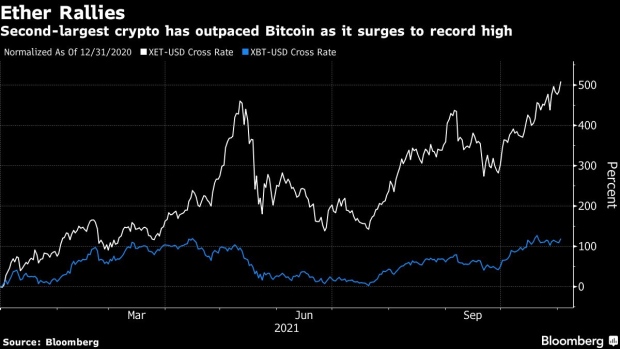 (Bloomberg) -- U.S. regulators are more likely to approve an Ethereum futures-based ETF before giving the greenlight on a fund that holds Bitcoin directly, according to Bloomberg Intelligence.

“Most market participants agree that a spot Bitcoin ETF would be superior to existing futures ETFs, yet SEC approval of the former may be delayed until late 2022 or beyond,” James Seyffart, analyst at Bloomberg Intelligence, wrote in a note Tuesday. An Ethereum futures exchange-trade fund could be approved as soon as the first quarter of next year, he estimated.

Two funds tracking Bitcoin futures started trading in October. The first, the ProShares Bitcoin Strategy ETF, accumulated more than $1 billion in assets in just days, while the second, the Valkyrie’s Bitcoin Strategy ETF, saw a quieter but still-vigorous reception. Their premieres built a lot of excitement about Wall Street acceptance toward crypto -- and help pave the way for further applications for such products.

“Ethereum may be, I don’t know, but it might be up on speculation that there might be an Ethereum futures-based ETF as well -- that would not be a surprising development,” Sam Bankman-Fried, co-founder and chief executive officer of crypto exchange FTX, said on Bloomberg TV.

The U.S. Securities and Exchange Commission allowed the Bitcoin futures-focused ETFs to go forward after Chair Gary Gensler said they provided significant investor protections. The agency has rejected all applications for funds investing directly in the world’s largest cryptocurrency. Ethereum is the world’s most-used blockchain network.

“Though a spot Bitcoin ETF is possible in 2022, SEC approval may take longer due to concerns about regulation in the underlying Bitcoin market,” Seyffart said.