China’s fiercest shot yet across the bows of the cryptocurrency world appears to have left investors mostly unruffled.

Though Bitcoin and some of its peers tumbled Friday after the People’s Bank of China issued a statement banning crypto transactions and vowing to root out the mining of digital assets, they have largely rebounded since. Bitcoin rallied close to US$44,000 Monday, near the level it was at before China’s announcement. Ether broke above last week’s US$3,100 level.

“There does appear to be buying support for both Bitcoin and Ether coming online as market participants digest the information,” Fundstrat strategists said late Friday as the coins began retracing their losses. “This is not the first time such an announcement has come out of China,” and if “we broaden our definition of ‘ban,’ then we can pinpoint seven dates, including today, in which we witnessed some semblance of a crypto crackdown” from Beijing. 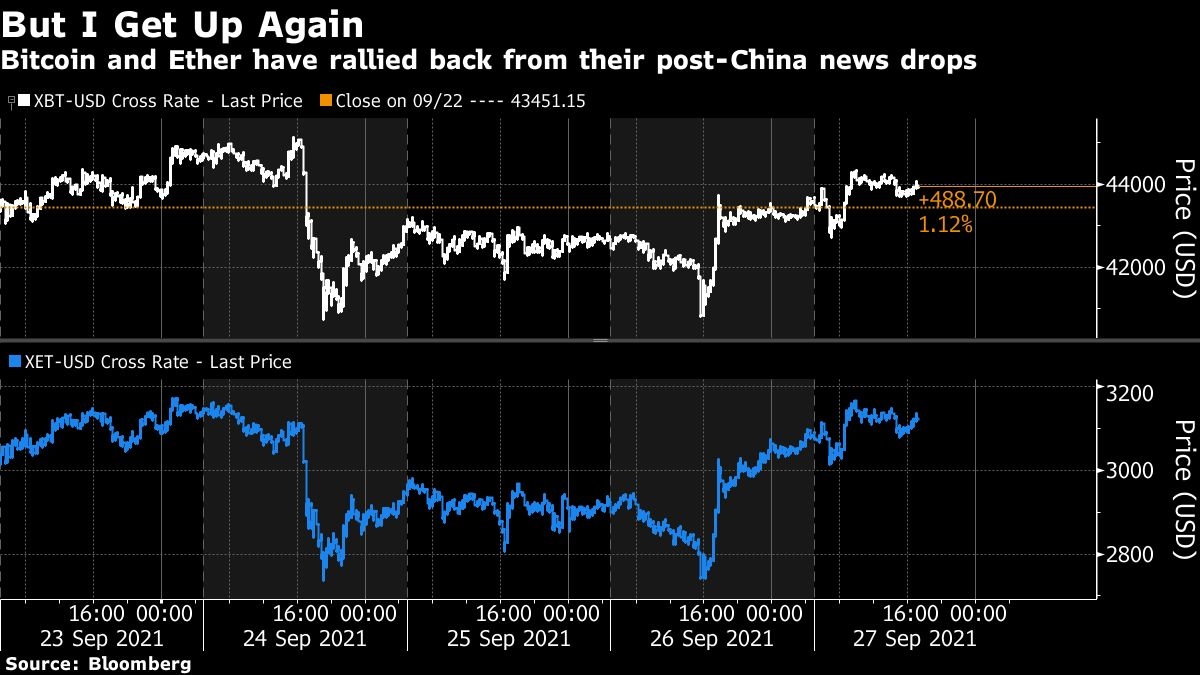 The PBoC’s move closed the longstanding loophole that enables citizens to maintain accounts with offshore exchanges. It also forbade the platforms from hiring locally for roles such as marketing, tech and payment, limiting their ability to serve Chinese customers.

Still, many miners have already moved out of China, which in April had a 46 per cent share of the global hash rate, a measure of the computing power used in mining and processing, according to the Cambridge Bitcoin Electricity Consumption Index.

Since the crackdowns began, the hash rate dropped by more than half from a mid-May peak through early July, Blockchain.com data shows. Its recovery indicates that miners have come back, whether inside China or elsewhere. In the immediate aftermath of the Friday announcement, the hash rate stayed fairly steady.

Huobi’s shares fell 22 per cent on Monday. Still, its token was up 13 per cent from 24 hours prior as of 9:45 a.m. London time, CoinGecko pricing showed.

Alibaba also responded to the new rules, saying it will prohibit the sale of virtual currency miners, in addition to the prohibition against selling virtual currencies such as Bitcoin, Litecoin and Ethereum. It’s closing the Blockchain Miners and Blockchain Miner Accessories categories effective Oct. 8, it said in a statement.

Others may yet benefit. A report on Friday from Grayscale, a digital-asset management firm, noted that decentralized finance, or DeFi, and U.S.-regulated exchanges might be among those primed to do well. DeFi could serve as an alternative for Chinese crypto investors should centralized players be forced out of the country.

There’s also the prospect of U.S.-regulated venues gaining volume as trading ebbs on large Asian exchanges as a result of the China ban.