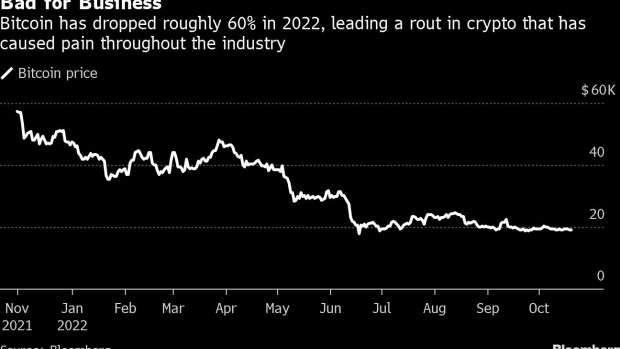 (Bloomberg) -- The convulsions that set the cryptocurrency market tumbling earlier this year and delivered shock waves through the industry have subsided. Now comes the shakeup in the C-suite.

More than two dozen high-ranking executives — from Alex Mashinsky, the charismatic and controversial co-founder of now-bankrupt crypto lender Celsius Network to Brett Harrison of digital-asset exchange FTX US and Jesse Powell, the outspoken head of FTX’s rival Kraken — have vacated their posts in the past two months alone.

While an assortment of idiosyncratic reasons has been given for the exodus, it’s clear the turbulence that shook the market starting in the spring has taken a toll. It would be hard for it not to, after $2 trillion worth of crypto evaporated in the rout. Yet market observers also see another common thread: The combination of a larger presence of institutional investors, heightened regulatory scrutiny and tighter purse strings at venture-capital firms is causing a reassessment of the type of management needed for the next phase of crypto. The recent calm that has settled over the market may itself herald a transition, some say, as traditional finance takes a bigger stake.

Gone are some of the founders famous for bombastic personalities and social-media feuds with competitors and skeptics — replaced, in some cases, by a more buttoned-up style of executive from the world of traditional finance. Mashinsky, for example, was replaced on an interim basis during Celsius’ bankruptcy proceedings by Chris Ferraro, whose resume includes 18 years at JPMorgan Chase & Co.

“In down markets, people restructure management for a bunch of reasons, one definitely being that the business and industry has matured and they are putting in a new management team to fit the environment,” said Stephane Ouellette, chief executive of FRNT Financial Inc. Some founders could be “moving on because the industry is getting more professional and they come from an era where it was more tin-hat.”

Among other high-profile shifts in recent months: Michael Saylor, the software executive-turned-Bitcoin evangelist, gave up his CEO title at MicroStrategy Inc.; Sam Trabucco departed his co-CEO position at crypto trading firm Alameda Research; Michael Moro left as CEO of Genesis Global Trading and Michael Patchen exited his position of chief risk officer at the same firm after just three months, according to a person familiar with the matter; Aya Kantorovich left FalconX Ltd., where she was head of institutional coverage; and Voyager Digital Chief Financial Officer Ashwin Prithipaul stepped down from his post at the crypto broker, which also succumbed to bankruptcy.

For R.A. Farrokhnia, professor at Columbia Business School, the changing of the guard is not a unique phenomenon when considering the history of high-tech products. The current crypto environment looks to him like a new chapter out of the 1991 business classic Crossing the Chasm.

In that book, author Geoffrey A. Moore discusses the “diffusion of innovations” theory, which attempts to explain how new technologies spread, and describes the chasm that emerges between innovators, early adopters and the more pragmatic mainstream users who come later.

“All of a sudden, you are not just dealing with your early adopters, you are starting to slowly cross the chasm,” said Farrokhnia, who is executive director of Columbia’s Fintech Initiative.

Even before this year’s carnage, crypto was undergoing this type of evolution; the rout has acted as an accelerant. In particular, the collapse of the Terra blockchain’s UST stablecoin helped send Celsius and Voyager Digital as well as hedge-fund Three Arrows Capital into bankruptcy proceedings while also causing pain for many other firms. Suddenly issues like budgets, controversial personalities and questionable business practices are much more acute problems than they were during last year’s raging bull market.

To be clear, not all shifts have meant outright departures, and some say they were a while in the making. Kraken’s Powell remains at the company as chairman, while MicroStrategy’s Saylor — now executive chairman — relinquished his CEO role in part so he could focus on the company’s Bitcoin strategy. But taken together, the changes may still signal a modulation in tenor within crypto.

The maturation of the industry, according to Daye, will manifest itself as more endowment funds and other large institutional investors continue to arrive, “giving that golden stamp of approval.” Already, giants from BlackRock Inc. to Fidelity Investments and Bank of New York Mellon Corp. are making their own inroads. In fact, while concerns about layoffs are swirling around crypto startups, Fidelity said this week that it’s hiring an additional 100 people for its digital-asset unit.

It’s not just the new management teams that are getting toned down in order, perhaps, to avoid scaring away a pension fund or endowment looking to dip a toe into crypto. Even the market’s recent tame price action bears the fingerprint of increasing involvement by institutions, some traders say.

After crashing from its record of almost $69,000 some 11 months ago, Bitcoin has been mired in a trading range — slightly above $20,000 and below it — since June. That, plus the tendency for crypto to move in the same direction as stocks, is a result of the growing influence of institutional investors and the exodus of retail traders, according to Michael Safai, co-founder of trading firm Dexterity Capital.

“We’re seeing a lot more institutional flow than we did over the course of the past five years,” Safai said on a recent episode of the “What Goes Up” podcast. “Now, institutional players are smart. So when we might have been playing checkers two years ago, we’re playing chess now. And when you’re playing chess, things tighten up and these guys are keeping things in the same range while we do price discovery.”

For venture capitalists investing in the crypto space, the growing presence of major financial institutions represents a rare bright spot that helps legitimize an industry rattled by hacks and scams.

“Clearly, it’s robust enough and we have enough liquidity now in this space to make it attractive to larger institutions,” said Lauren Stephanian, partner at crypto VC firm Pantera Capital. “It’s been something that the industry’s been striving for, for many years.”

BlackRock’s partnership with Coinbase Global Inc. to help its clients trade Bitcoin and BNY Mellon’s launch of a crypto custody platform are promising signs for crypto, according to Matt Walsh, founding partner at crypto VC firm Castle Island Ventures. He said that growing institutional interest sets this current bear market apart from previous “crypto winters” — industry parlance for a prolonged downturn — indicating a greater maturity for the industry. And the recent swath of executive departures? They represent a “natural ebb and flow,” he says.

Still, for many venture capitalists, the downturn has caused a reassessment of the sector. Once the industry’s biggest cheerleaders, VCs are pulling back, with funding for crypto startups plunging 37% to $4.44 billion in the third quarter compared with the same period in 2021, according to research firm PitchBook.

“These markets make it challenging for all companies to raise capital,” said David Pakman, managing partner at VC firm CoinFund. While crypto deals are still happening, they are fewer in number and include valuations far lower than the sky-high price tags that many crypto companies were able to obtain last year.

Pakman pointed to growing regulatory oversight as one catalyst for what’s driving changes in crypto C-suites. Yuga Labs, creator of the Bored Ape Yacht Club nonfungible-token collection, and crypto exchange Coinbase have each caught the attention of the US Securities and Exchange Commission over potentially offering unregistered securities. Greater scrutiny often “requires a different type of executive” who has more experience and is better equipped to handle this type of situation, he said.

For Thomas Klocanas, general partner and head of venture for BlockTower Capital, this crypto winter is a mixed bag. His firm raised a $150 million fund this month dedicated to crypto investments, but Klocanas said BlockTower is planning to deploy the capital over a period of two-and-a-half to three years as the market settles — a slow pace for crypto, but typical for standard venture capital. He’s advising firms that are part of his investment portfolio to have 18 to 24 months of financial cushion as a reinforcement and said that he expects to see more layoffs down the line. Companies like Blockchain.com, Gemini Trust Co. and Crypto.com have already slashed their workforces.

Klocanas still sees significant promise in crypto and welcomes the greater regulatory scrutiny the industry’s new maturity has brought. He said proper regulation would have prevented crises like Celsius. The collapse and subsequent bankruptcy filing of the crypto-lending platform locked customers out of $200 million worth of their digital-asset holdings. He said these kinds of platforms cannot exist if the crypto industry wants to survive and eventually usher in billions of users.

“No one wants their life savings to be able to disappear at any moment when they thought they were using a savings account,” he said.

But if a housecleaning is in order to get to the next level, that means changes at the top.

--With assistance from Stephanie Davidson and Carly Wanna.