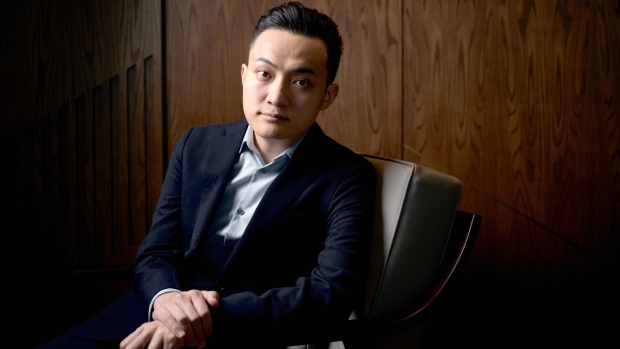 Justin Sun, founder of blockchain platform Tron, poses for a photograph in Hong Kong, China, on Friday, May 8, 2020. Making his personal fortune by embracing Bitcoin as early as 2012, and now by his own account worth somewhere in the hundreds of millions of dollars, Sun is part of a second wave of crypto entrepreneurs who envision putting more than just digital money and payments on a decentralized platform. , Bloomberg

(Bloomberg) -- Tron founder Justin Sun said he owns “tens of millions” of Huobi Tokens and that he intends to try and boost the latter now that he’s an adviser to its linked crypto exchange.

“I would see myself as one of the biggest holders” of Huobi Tokens in the world, Sun said in a Bloomberg Television interview with Emily Chang on Thursday.

He added that he began accumulating the token associated with the Huobi crypto exchange in 2013. The coin has rallied about 80% in the last week after Sun became an adviser for the exchange.

Huobi is a top-10 crypto exchange globally, according to tracker CoinMarketCap, with about $879.5 million in volume in the last 24 hours. Sun said he hasn’t purchased a stake in the business.

Sun said he will also focus on taking Huobi global and eventually even back into China, if regulations allow.

Sun said his team has looked at assets of bankrupt crypto lender Celsius Network, but hasn’t decided whether to bid yet. Tron’s native token just became legal tender in the Commonwealth of Dominica, an island nation in the Caribbean.

The price of the HT token rose about 12% to $7.79 in the past 24 hours, according to pricing data from CoinMarketCap.

(Adds trading in the Huobi token for Friday.)