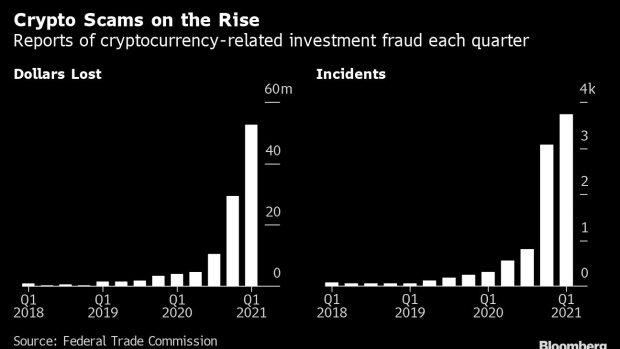 (Bloomberg) -- To investors hunting for the next Dogecoin, the more than 19,000% price gain that cryptocurrency SafeMoon posted in its early weeks was like catnip. Though the price of the four-month-old token has dropped since then, more than 2.4 million investors have bought it, according to its developers.

Yet some crypto watchers have raised red flags over SafeMoon’s unusual structure. It charges a 10% fee to buy tokens and another 10% to sell -- almost unheard of in the digital currency world. Half of these fees are paid to owners as an incentive to keep holding and the other half goes into a liquidity pool controlled by the developers. SafeMoon calls itself a DeFi token, or one that uses decentralized finance to govern functions through software, but it has a chief executive officer and chief operating officer. Critics also worry about the discretionary nature of the “manual” coin burns used to adjust its circulation.

The flag-wavers point to these and other concerns to warn that SafeMoon may not, in fact, be safe.

“The manual burns, alongside the company having a pretty large stake in the coins, just speaks to me of a manipulation risk,” said Jasper Lawler, head of research at London Capital Group, an online brokerage firm offering cryptocurrency derivatives. “Whenever there’s some sort of mechanism to stop selling, that’s a bit of a warning sign.”

One investor who wasn’t deterred was Barstool Sports Inc. founder Dave Portnoy. In May, he announced to his 2.6 million followers on Twitter that he’d bought $40,000 worth, despite saying that SafeMoon could be a Ponzi scheme, a scam in which early investors’ returns are paid with funds coming from later buyers that collapses when new deposits dry up or too many people try to cash out.

“If it is a Ponzi, get in on the ground floor,” he said. In about an hour, the price of SafeMoon rose 18%. A Barstool Sports spokesperson was unable to confirm whether Portnoy still owns SafeMoon.

Out in the Open

Jack Purdy, a senior research analyst at crypto analysis firm Messari Inc., said that while he didn’t know how risky SafeMoon might be, its website makes it clear that it’s designed to get investors to buy and hold to “earn passive rewards through static reflection as they watch their balance of SafeMoon grow indefinitely.”

“What differentiates SafeMoon is that they’re putting this out there in the open for everyone to see, and are not trying to hide the fact that’s how the system works,” he said.

In an interview from his home in the U.K., John Karony, SafeMoon’s 25-year-old chief executive officer, emphatically denied that his token is a Ponzi scheme. “I put everything, my identity and my credibility, on the line for SafeMoon,” he said.

Karony likens SafeMoon’s holder payments to the beginnings of businesses like Amazon.com Inc., where “earlier investors receive higher returns and growth because the initial risk they took was higher than those who joined later.”

And while Karony said he wasn’t sure what to make of Portnoy’s tweet, he was appreciative. “It’s cool to see big names talking about SafeMoon because it means more people are hearing about SafeMoon,” he said.

It’s impossible to determine at this point whether SafeMoon is a riskier investment than any of the other 4,000 or so active cryptocurrencies. Crypto skeptics like Megan Horneman, direct of portfolio strategy at Verdence Capital Advisors, warns investors to steer away from all digital coins, since they have no underlying assets and are threatened by regulatory oversight.

“You can’t ever determine how long or how far up a speculative investment can go, and you tend to be very shocked at how much it falls,” she said.

Yet tales of meme-coin holders becoming millionaires have attracted new waves of retail investors to crypto -- along with a growing number of nefarious players. In May, the Federal Trade Commission tallied a record number of crypto investment scams, with Americans’ losses totaling around $80 million since October.

SafeMoon captured attention from the get-go. Its name evokes a prudent form of the “to the moon” mantra embraced by crypto crowds looking for prices to burst straight up.

“I like the word ‘moon,’ because that’s where I want it to go,” Portnoy said in his purchase announcement.

SafeMoon was created by Karony and two of his fellow developers from TANO, a Provo, Utah-based video game studio with a bare-bones website. It launched in March with a big social media push, including a giveaway of 100 billion tokens (then trading for less than $0.00000001 each) for “lucky winners” who followed @safemoon, liked and retweeted then tagged three friends.

Influencers like disc jockey Diplo, YouTube star Jake Paul and platinum-selling rapper Lil Yachty touted SafeMoon, though none were compensated for doing this, according to Karony. SafeMoon’s Twitter account now has more than 968,000 followers.

“That’s one of the things we truly focused on, providing a means in which the community could talk to the team,” Karony said. This included ask-me-anything sessions held on Discord for the curious to learn more.

But one of these sessions caused SafeMoon’s price to plummet by more than 50%.

The day after April 20, a day celebrated by marijuana enthusiasts, the SafeMoon team hosted an AMA with two of its members who joined by live video from a crypto conference in Miami. Instead of just providing updates on the token, Thomas Smith, SafeMoon’s chief technical officer, wandered around the conference floor in an unfocused way to capture attendee shoutouts and show off a painted Porsche.

“They basically walked around showing people with Lambos and talking crap,” said Cora Harrison, a YouTube personal finance influencer. “It was just really random and not what you wanted to see from somebody to invest money with.”

“It was almost like you just gave a 21-year-old a million dollars,” Harrison said. “I get it -- they were excited to be so popular.”

Later that evening, SafeMoon tweeted an apology for the presentation.

“Some people just didn’t like it, and I understand that,” Karony said in the interview. “The points that I wanted to come across, we just weren’t able to actually tell people in a structured manner.”

SafeMoon today trades around 0.0000027 a coin with a market capitalization of about $1.6 billion, sharply lower than its high of almost $6 billion in mid-May, according to CoinMarketCap.

Harrison, who still owns SafeMoon, said that the developers have become more professional since the AMA incident: “They’re a bit more scripted, they sit down, they’re in suits.”

In June, SafeMoon launched a beta version of SafeMoon Wallet, a place for storing and trading coins and required applicants to sign non-disclosure agreements.

“I haven’t encountered many who would try to put up more barriers for new users,” said Maria Shen, a partner at Electric Capital, a venture capital firm focused on cryptocurrencies. Still, she added, “the wallet space is fairly competitive, so it’s not unthinkable.”

Hank Wyatt, SafeMoon’s vice president of research and development, said in a Discord chat that the team will eventually “host an open beta” version before releasing the full application.

According to Karony, other future plans include a yet-to-be-unveiled initiative that’s “fuel to the freedom of the un-banked.” And while SafeMoon was created on the Binance Smart Chain blockchain, the company said that it’s in the process of launching its own exchange platform this summer to establish a liquidity pool.