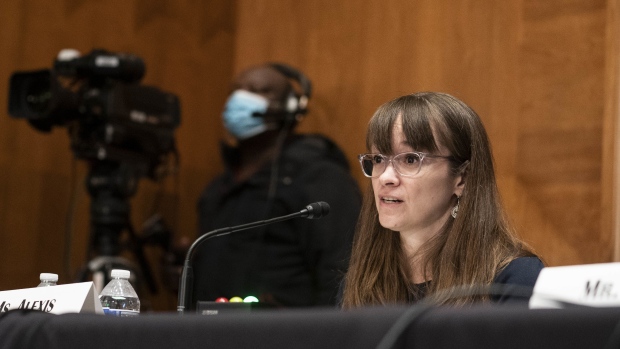 Alexis Goldstein, director of financial policy at Open Markets Institute, speaks during a Senate Banking, Housing, and Urban Affairs Committee hearing in Washington, D.C., U.S., on Tuesday, Dec. 14, 2021. The hearing is titled "Stablecoins: How Do They Work, How Are They Used, and What Are Their Risks?' , Bloomberg

(Bloomberg) -- A vocal skeptic of cryptocurrencies is joining the Consumer Financial Protection Bureau, a sign the agency may be pushing to ratchet up scrutiny of digital tokens.

Alexis Goldstein, financial policy director at the anti-monopoly organization Open Markets Institute, will work on a range of issues including digital assets, according to a CFPB spokesperson.

The appointment of Goldstein, whose views are often aligned with progressive Democrats, may cause angst for crypto firms because she has repeatedly raised concerns about risks posed by tokens, including stablecoins, and has called for more oversight.

Democratic lawmakers, including Senator Elizabeth Warren, have said they want CFPB Director Rohit Chopra  -- who took the helm in October -- to play a more active role in cracking down on abuses in digital assets.