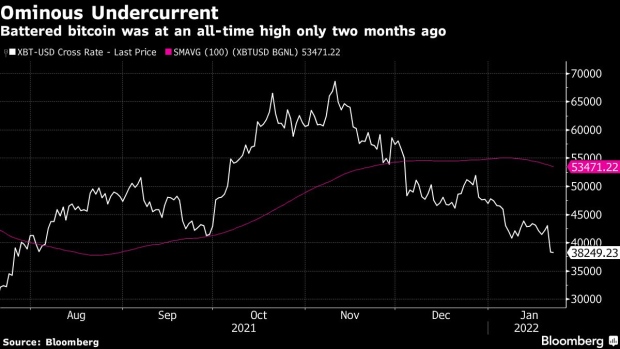 Peter Smith, co-founder and chief executive officer of Blockchain Ltd., speaks during the Bitcoin 2021 conference in Miami, Florida, U.S., on Friday, June 4, 2021. The biggest Bitcoin event in the world brings a sold-out crowd of 12,000 attendees and thousands more to Miami for a two-day conference. , Bloomberg

(Bloomberg) -- Blockchain.com is adding the lead independent director from Walmart Inc., the world’s biggest retailer, to its own board in the run-up to a potential public offering by the cryptocurrency service.

Tom Horton’s arrival adds to Blockchain.com’s array of backers from other blue-chip firms and dovetails with crypto’s spread; the company is already known for its blockchain wallet that helps people handle digital currencies. But there’s also fear that a crypto winter is at hand, as Bitcoin’s price continues to plummet from its all-time high in November.

“There’s a gigantic shift underway in financial services and currencies, and being part of it is very exciting,” Horton said in an interview. “What’s going on here is relevant to things I am involved with elsewhere -- other boards, other companies.”

The move comes as Walmart prepares to enter the field with its own cryptocurrency and a collection of non-fungible tokens. Peter Smith, Blockchain.com’s chief executive officer, said in an interview his company doesn’t have a deal with Walmart, and a representative for the Bentonville, Arkansas-based merchant didn’t immediately respond to a request for comment.

Blockchain.com has been beefing up its board ahead of a planned initial public offering, which could happen in the “near to medium term,” Smith said. Whether the public markets are ready for another crypto debut is unclear, given the recent plunge in digital currencies to bear-market levels.

Bitcoin, for instance, has lost almost half its value as of last week since early November. Coinbase Global Inc. is down 23% since the crypto exchange went public last April.

Newer companies sometimes seek to soothe jitters among potential investors, partners and customers by adding veterans of established mainstream businesses. Horton, 60, is on the board of General Electric Co.; he was previously chairman of American Airlines Group Inc. and a senior adviser at Warburg Pincus LLC, the private equity firm whose president is Timothy Geithner, the former U.S. Treasury secretary.

The company is launching new services, such as its upcoming NFT marketplace, and growing internationally. It’s made five acquisitions in the last 12 months, including one to expand in Latin America, Smith said.

Blockchain.com isn’t the biggest in the business. With its 37 million verified users, it has somewhat more than half of Coinbase’s customer tally.

Last year, revenue increased about tenfold, with the institutional business growing at almost double that pace, he said. Blockchain.com is “extremely profitable,” said Smith, who wouldn’t disclose exact revenue or profit. It employs 550 people, up from about 200 a year ago, he said.

“This is a multinational company, it’s a growing company, it’s getting bigger all the time,” Horton said. “Where I may be able to help is help mature the company even more.”